Last week, we did something we have never done before, in a lifetime of vacations in Coastal Maine.

Went to see a play.

The Camden Shakespeare Company in cooperation with Ziggurat Theatre Ensemble is producing Aquitania, written and directed by Stephen Legawiec, and one of the featured singers is going to be a new actor-teacher with Great Lakes this fall. It was an opportunity I did not want to miss, having long considered checking out the company’s work, which is presented on a beautiful lawn behind the charming Camden Public Library and a short walk to the harbor.

We generally prefer to stick close to the cove. That is, after all, why we go there. To hide from everything for a little while, and theater is my job. But I was delighted by the performance, my son was too. A witty, punny, fanciful production with some lovely music and good laughs.

There’s a couple ways to get to Maine from Ohio. You could take the Massachusetts Turnpike, as we did this year, though it does have its problems because it is in Massachusetts. One option that was not open to us this year was to travel through Canada.

My parents took us that way in 1976, though I barely remember it as Dad liked to drive through without stopping very much. We took the scenic route by Niagara Falls, without getting out of the car.

Six years ago, we took the kids and made a time of it, overnighting at Niagara and spending several days in Montreal. That was a magical week.

Twenty-five years ago this week, my wife and I returned from our second road trip together, through Niagara, Toronto, Montreal and Quebec City, on our way to Friendship. There was an Olympics going on that summer, too. Our first day on the road in late July, the papers were reporting on the pipe bombing in Centennial Park, and the TWA 800 crash.
This trip was my first real break from work in a year. And it had been quite a year, concluding my first season with Dobama's Night Kitchen. A third iteration of The Realistic World was have an extended summer run as we traveled, and while I looked forward to sightseeing and relaxation, just as I had during our drive through the midwest in 1995, I was also keeping my eyes open for new ideas. 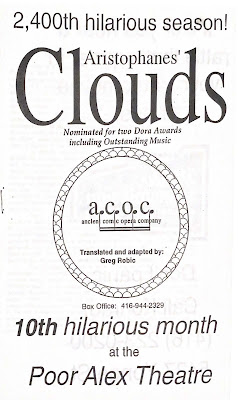 You may find this hard to believe, but this member of Generation X did not own a pair of Doc Martens until he was twenty-eight. True story.

In Toronto we bought several pairs of shoes, and also took in a show. The Ancient Comic Opera Company was presenting an original adaptation of Aristophanes' Clouds at the 106-seat Poor Alex Theatre. From my travel journal:

Tuesday, July 30, 1996 - Toronto
“I want a theatre that size. I also want to dedicate more of my time to writing plays … I think I’d rather leave directing to others.”

Huh. Wish I'd kept that thought.
Enjoying a fifteen month run, the text for Clouds was freely translated by Greg Robic, ACOC Artistic Director and it was drop-dead hilarious. Faithful to the plot of the ancient Greek original, it had elements of Forbidden Broadway and also Tom Lehrer, incorporating familiar music by Gilbert and Sullivan, Wagner, Rachmaninov, Mozart, and several others.

This take on the corrupt influences of that scoundrel Socrates (they mistrusted teachers even 2,400 years ago) included songs with titles like “Strepsiades In the Night” and “No Cockfights Today” and a rousing direct address to the audience to support independent theater, eschewing those Broadway shows that had been running in the city for years. They closed the first act waving a flag with a picture of a French orphan on it.

After the performance I met the playwright — Robic, not Aristophanes. He said he also had a one act version of Lysistrata that used to run as a midnight show which he was planning to expand into a full-length. Instead, he pursued an education in Japanese theater and is currently a Rakugo storytelling in New York City, working under the name Katsura Sunshine.

A week or so later I would pick up a copy of Lysistrata in a used book store in Camden, Maine. This experience and that book would lead to my directing Lysistrata at Bad Epitaph (featuring original songs by Dennis Yurich) in the year 2000.

Montreal was a revelation, like a dream where you discover there is an entire carnival lurking in a room in your house you didn’t even know you had — it’s right there, waiting for Americans to discover. We loved our brief moment here so much we got an AirBnB with the kids in 2015 and stayed several days.

Strolling past an HMV (that’s what we used to call a record store) we noticed some kind of concert going on, and ducked in. KISS was going to perform in the city in a couple days, and the place was hosting a lip-sync contest. One band was particularly excellent and when I asked if I could take a photo they insisted it include “my woman.”

Listening to these guys in KISS make-up switching between perfect English with us and French among themselves was a bit of a mindfuck. So, too, was something we spotted across the street from a cafe where we were dining al fresco.

Thursday, August 1, 1996 - Montreal
“Toni noticed a crowd gathered around a life-size statue of a clown holding a book. It was a bronze statue and Toni wondered what little purveyor of Montreal children’s mirth it was dedicated to. When we got closer, we saw it move!”

As you can tell, we had never seen a “living statue” busker before. Having seen dozens since, I sincerely believe this guy was the best. Not only did his make-up and costume and prop have the patina of aged and weather-worn bronze, he had these little bells which emphasized his movement — when you put something in his hat he would do a brief routine — which lent to the illusion that he was a truly mechanical automaton.

We watched him for an hour as we ate and relaxed. Crowds would build and with all the coins being tossed into his hat he might be moving non-stop for a short while. As fewer people were contributing he would come to a stand-still and folks would drift away and he would be still for several minutes with folks coming and going. Pedestrians would walk past, not even noticing him, until a curious soul would put a coin in the hat full of money and the cycle would start all over again. One old man even exclaimed, “Oh, my GOD!”

Yes, I know. It’s just a living statue, or as they referred to it in Hot Fuzz, the “extremely irritating living statue.” Having noticed this one, I saw several more before we left the country. But you never forget your first, you know?

Arriving in Flood’s Cove, I shared with the woman whom I would later marry this important corner of my family history. We joined my brother and his girlfriend, my parents and my grandfather for some long, leisure hours on the coast.

The day before my father’s birthday I had something of a belated birthday party with cake and gifts. Dad presented me with Mary Maher’s book, Modern Hamlets and Their Soliloquies, in which she describes several important 20th century productions concentrating on how each performer tackled one of the pivotal speeches. The book includes interviews with such Hamlets as Derek Jacobi, David Warner, Kevin Kline, and Ben Kingsley.

I had enjoyed Hamlet in the past, we had even seen Ralph Fiennes play him on Broadway the year before. But it was this book that set me down a path I would travel for some time.

Sunday, August 4, 1996 - Friendship
“Reading this, reading how the great acting men of this century tackled what some feel is theater’s greatest role (if not play) makes me long for directing Shakespeare. R&J was difficult. Hamlet would be more so, but I would like to try.”

By the next day I was already making notes.
Within three years, I would direct Hamlet. Seven years after that, I directed it again. Thanks for the book, Dad.