“Everyone wants a pop star, see? But I am a protest singer.”
- Shuhada Sadaqat (Sinéad O'Connor, Rememberings) 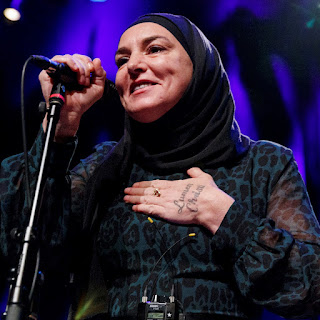 We were aware of her immediately, late 1987. That one, with the impossibly huge eyes, shaved head, beautiful and aggressive Irish voice. Troy was about desire, heartbreak ... was it also about abuse?

The inside back cover is shocking. Fashion photos from the before, her dark bob of hair, the sexy poses. Not the person I know. The one who destroyed her career in a flash on live television. The one who was Peter Gabriel’s plaything at WOMAD. Vulnerable, fierce, and quite possibly insane.

Sinéad O'Connor, now Shuhada Sadaqat, the legend: I had conflated two stories I had read about her, though they amount to the same thing. I was given to understand she had originally shaved her head, just prior to promoting her first album, because management insisted she get an abortion. 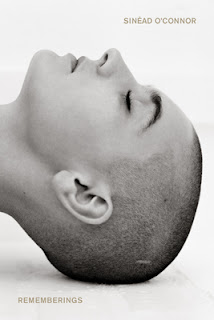 Well, she split with her management, and her entire production team, because of this insistence. She’s already shaved her head when they pressed her to dress more feminine; short skirts and to let her hair grow.

In either case, it speaks to men telling women what to do, and she just said fuck that.

(I will continue to refer to her here as O’Connor as that is her stage name, and her name on the book. When she refers to herself professionally as Sadaqat, I will call her that.)

The assumption was that people who have been the object of abuse are “messed up.” That they have been damaged and therefore have been twisted in the manner in which they engage with the world.

She very clearly describes that they are instead those who can clearly see the world as it truly is, while those of us fortunate enough never to have been dominated or traumatized by anyone, ever, we are the ones with a narrow, fuzzy view of the world and how it works.

O’Connor’s story is a search for being, it is not a rock and roll memoir. There are a few passages about how she “achieves fame” but in fact she makes it sound completely arbitrary, which is the point. Success is arbitrary, abuse is also arbitrary. Those who we see as stars and those we see as victims, neither have done anything particular to deserve their position.
Monday, August 9

Less than a year after she ripped up a photo of John Paul II on SNL, I was surprised to see O’Connor onstage with Peter Gabriel at the WOMAD Festival in Columbus. She had just recorded a duet with him on his most recent album. But you don’t expect to see such high-profile singers accompanying other artists just to do that one song.

But there she was, singing back-up for Peter Gabriel. She sang her part for The Blood of Eden and the vocal for Don’t Give Up which had been recorded by Kate Bush.

It was apparent from the audience, both in the way that she looked at him, and also in the stupid, arrogant manner her was strutting around her during Sledgehammer that they were having some kind of affair. His crotch-thrusting act during that song was particularly embarrassing. He was trying to play it as a joke, but it still seemed territorial. “Hi, everybody! I’m fucking Sinead O’Connor."

I was not surprised to discover that he was less than serious about their relationship. I’ve been listening to his stuff recently and I’m not sure it holds up. I used to idolize that guy.
Tuesday, August 10

It has always bothered me, from the first time I heard it, that Bono introduces the live version of Sunday Bloody Sunday by saying “This is not a rebel song.”

Isn’t it? You evoke a specific instance of Imperial British aggression against a Republican Irish protest, but it’s not a song criticizing British colonial oppression? Is it not a protest song? What is it, then? It’s just a song against violence, in general. Violence is bad. Boo, violence.
Ok, Bono.

O’Connor has never had such qualms. She once wrote and recorded a song called This Is a Rebel Song because she also believes Bono to be a dithering twerp. She describes herself as a punk, a punk with an agenda, as all true punks have, to call out the abuses of an authoritarian system where she sees them.

In 1992, she was banned “for life” from NBC for her naming of the Catholic Church as the enabler of a system of child abuse. In 2016, the movie Spotlight won the Academy Award for Best Picture for doing the exact same thing.

Her voice, whether she be whispering or screaming, has cut a path through my adult life. I always recognize it, even when she is singing in support of someone else. The later chapters of the book detail the significance of her more recent work, albums with which I had not been familiar. I have been listening to them as I have been reading.
The sound of her voice has become so familiar to me, like she’s someone I went to school with. In a way, I guess she was.
Posted by pengo at 12:00 AM