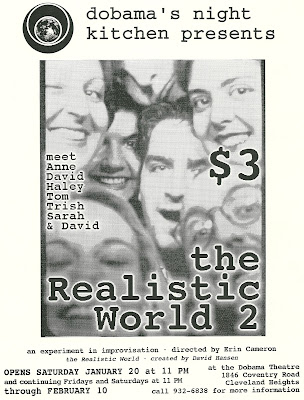 When asked what made him qualified to criticize theater, former Plain Dealer theater critic Tony Brown was fond of saying, “I got the job.”

If you were to ask what made me feel qualified to create a long-form improv comedy, when I had received little to no training in the artform, I could have said much the same thing. I took two courses in college, and I had seen a few club and long-form improv shows.

I shared a detailed history of my education learning through trial and error in a post last summer.

In 1995 the first so-called “reality” show, MTV’s The Real World had wrapped up its London season, and after four years of throwing seven young people together to show “what happens” (nothing did) the producers were about to begin forcing things to happen. They stopped casting normal people who possessed things like dignity and shame, and started dragging in sluts and assholes.

Impressed as I was with the narratives of the early seasons, especially San Francisco which featured six very likeable people and one dickface who the rest immediately kicked out of the apartment, because that’s what you do. The idea of our performance would be for seven actors to assume alter-egos which they would carry from performance to performance, week after week. A few additional actors (we called them “ringers”) would play pizza guys, waiters, family members or boyfriends, whatever was suddenly called for.

This first iteration, The Realistic World 1, featured Amanda, Christine, Dan, Erin, Jeff, Marty and Tia - their real names. The setting was a fictional rental house in Tremont (this was confusing, some audience members wanted to know where in Tremont we were performing) and we would use some word association and ask the audience some questions at the start of the show to act as subject matter for the story.

Yes. The very first performance, as host, I asked an audience member to share the worst thing that had happened to him recently and he said he came straight to the theater from his uncle’s funeral. I was literally speechless. I have it on video, I couldn’t say anything. That was AMAZING.

We kept the framework basic, each performance started with a house meeting where all seven actors would share issues inspired by the audience suggestions, and then break into two or three person “give-and-take” scenes (we called them "Change Ups") cutting from one scene to another, and the action (ideally) would build.

Finally the first half of the performance would end with the “Miracle Scene” which took place in one agreed upon space, and into which an unlimited number of actors could appear. In this scene, it was very important for actors on the stage to give-and-take focus, so though you did not necessarily leave, only one conversation was happening audibly at any one time.

It was called the “Miracle” scene after that New Yorker cartoon by Sidney Harris where there’s this chalkboard with an elaborate equation and a blank space just before the solution which reads, “... then a miracle occurs.”

Then we’d do it again, change ups followed by a “miracle” scene. There would also be "confessionals" in which a character would sit on a stool and improvised a monologue about their feelings.

An entire episode was book-ended by a house meeting, during which everyone would toss out grievances or personal news which would be fodder for the show, and we would conclude with house dinner. Each episode someone would be responsible for making “dinner.”


DAN: (incredulous) You made dinner?
TIA: Tacos.
ERIN: Did you make any without meat?
TIA: Yes.
ERIN: (surprised and delighted) Really?
TIA: Yes.
(beat)
TIA: They’re the ones with nothing in them.

The first run was an interesting experiment with some wonderful moments, but Erin was able to shape the scenario into a much more polished performance, and we had all learned an awful lot from the first go round. Each member of the original cast was a ringer for this one, and they had the opportunity to create recurring characters within this new neighborhood.

TRW2 was set in an apartment on Coventry, which was much less confusing for everyone and we were able to make reference to many venues on the street with which everyone was familiar.

Living inside of it myself was a bit heady. I created an Über-David, an insecure stock trader with a sharp tongue, I had the opportunity to be the kind of bust-out asshole you might know me as if you only know me through Facebook. However, the fact that I was the oldest of the house members (at 27 almost ten years older than Haley, our youngest at 18) made me the butt of many age-related jokes.

Really. I have been dealing with this shit for a long time.

Anyway, it was exciting to craft an alternate personality and to see how much he might change over the course of seven episodes. The agenda that my character had often bumped up against those of other characters creating some true friction which didn’t always remain on stage.

Critical response to our little experiment was mixed. The Free Times accused us of wanting it both ways; improv comedy laughs and compelling personal involvement, which "this callow troupe isn't up to delivering." Scene said "something this young and hip is a boon to any city which boasts a Rock and Roll Hall of Fame," though they may merely been baiting the Free Times.

We knew we had made some kind of impact when the new "club" improv troupe in town, Cabaret Dada, made reference to us during one of their performances. Asking the audience to suggest emotions, one called out, "Ennui!" Host Jeff Blanchard made one of his iconic skeptical faces and said, "Ennui? What do you think this is, The Realistic World?"

Night Kitchen developed other long-form improvs (One Step Beyond, Soap Scum) which succeeded in providing a definite story structure (urban legends, soap operas) but also relied a bit too heavily on tropes and types. I think what I love most about The Realistic World was the same thing I enjoyed about the first few seasons of The Real World, watching real young people figure out real life situations realistically, with real emotions on the line -- happiness, embarrassment, affection, humor -- everyone reaching to achieve their own personal success or failure. It's what people in their twenties do.

Recently I uncovered our Trivial Pursuit - 90s Edition. Yes, there is such a thing. It came in a silver, metal box with the legend, The most trivial of decades. Indeed, as Carl Jung once said, “May you live in interesting times.” I wish our times were as dull and introspective as they were twenty years ago.
Posted by pengo at 8:05 PM