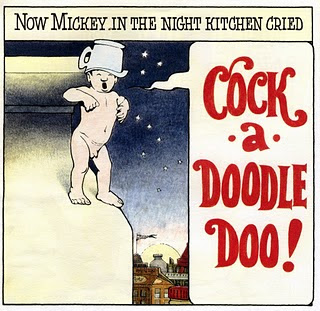 When Dobama Theater Artistic Director Joyce Casey asked me to curate a late-night series of performances for teenage and young adult audiences, it didn't take me very long to choose a name for the project.

The play I was currently writing, The Vampyres, was set in a goth-themed coffee house called The Night Kitchen. There a couple allusions to children's books in the play, in particular books that went to dark but dreamlike places.

When Dobama's Night Kitchen started I was twenty-seven. I had already put on the trappings of adulthood -- marriage, home-ownership, divorce -- finding each an ill fit. I was in a new relationship with a woman who encouraged me to re-discover the childhood I had always been determined to scorn, deny and suppress. My mission was to create works which respected and celebrated young people, from their point of view.

Joyce kept trying to thrust This Is Our Youth upon me to direct for DNK. I have a lot of respect for Kenneth Lonergan. I really like his movie. But stories about wasted people acting wasted are really boring ... I couldn't get past the stage direction describing as one of the kids "expertly rolls a perfect joint." Really? That must have been an amazing joint. I think it was eventually produced at Beck Center, but anyway.

We had a basement after dark, when the adults had checked out, to be creative. That was dreamlike in itself. And for this guy in his late-twenties it was a race against the clock, I started getting delirious around 12:30.

In The Night Kitchen was published by Maurice Sendak in 1970. Since publication it has remained controversial, and for all the wrong reasons. Well, there's one reason, and it's between Mickey's legs. There's a boy running around naked in it!

Yes, well. There's a boy running around in my house, naked, pretty much every day, but I wouldn't call that pornographic, and I would have some pointed questions for anyone who does. The child doesn't read In The Night Kitchen and think it is sexual, only a sad and ashamed adult does that.

And there was never any nudity in Dobama's Night Kitchen either, unless you count that time Peer's junk fell out of his pee jays during The Realistic World 3, but I wouldn't call that sexual, either.

In The Night Kitchen was inspired by, practically stolen from the classic, early 20th century comic strip Winsor McCay's Little Nemo In Slumberland. That comic featured a boy's dreams where anything could happen, and did, on his fruitless quest to reach Slumberland to take his place as rightful playmate to the Princess. More on that later.

Remarkably, I received the second volume in a large-format, collectible edition of the strip which includes at least one strip in which Nemo appears naked. Because in dreams, this happens all the time.

The being naked part. Not being eaten by a polar bear. At least, not to me.

Sendak's In The Night Kitchen also does not include any polar bears. But it does include three, gigantic chefs who may look like Oliver Hardy, but that only softens the fact that each sports a "Hitler" mustache and attempt to bake the obviously circumcised Mickey in an oven. Yes, there are far more disturbing things to trouble a person's sleep than a small child's genitalia.

So this theater project was named for an often-timed banned children's book, and for three years it felt like a cozy playhouse, a respite from the adulthood I thought I'd wanted. Leah, who was in her teenage years back then -- in fact didn't even start attending DNK shows until after I'd stepped down as director of the project -- once recounted to me the feeling of excitement she always had walking down those steps into the basement, it was like a vibration, maybe because the music was always played a little too darn loud, not knowing what was going to happen that night.