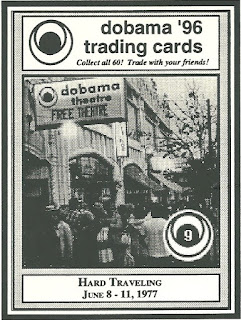 Twenty-five years ago I was working as the public relations director at Dobama Theatre. This was an accident. That summer I had been tapped to create the Night Kitchen, a series of late night theater programs for “the kids.” It wasn’t a salaried position, so when the recently-hired p.r. director suddenly quit, the artistic director looked to me and asked if I wanted a job.

I have been into marketing my entire life. When I was a kid I made greeting cards, and designed boxes of cereal. During the Guerrilla years I was responsible for contacting the media and read up to learn how to properly create a press release, where to find contact information for the papers and stations, who to call and when and what to say and how to say it.

My first big assignment was the holiday ask. You know how every non-profit contacts you around this time of year to hit you up for the annual fund. It’s a time of giving, it’s all the last month you can get those tax-deductible donations in.

This year, my first in this new position, I had a brilliant idea -- brilliant in that I stole it from Françoise Mouly, Art Spiegeman and the crew at RAW Magazine. An alternative comics anthology from the 1980s, in one edition they included “City of Terror” baseball-type trading cards, complete with bubble gum. Each copy of the magazine included only one card, artist Mark Beyer had only created eight different cards but they were numbered as high as #76 to give the impression there were many more.

I proposed we include Dobama Trading Cards with the annual fund request. I would design a sheet of nine cards (“Collect all 60! Trade with your friends!”) each would feature one production photo from the theater’s history on the front, with data about that production on the back, even including a small note about what was featured on the next card, a card which did not actually exist. 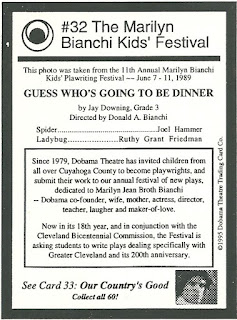 Clever me, I even made one of the cards an ad for our upcoming show in the Night Kitchen, the improvised Realistic World.

This was my first big mailing job, and the most intricate use of Photoshop I had attempted to date (that’s PhotoShop 2.0) Our technology was very basic in those days, we only had PCs in the office, so I was designing this on my Mac at home, then driving to the Kinko’s in University Circle to use their laser printers. When I messed something up I would have to go home to edit it, then drive back out to Kinko’s to see if I had gotten it right.
These things weren't even in color. It was a nightmare. I had a nervous breakdown. Joyce was extremely supportive. She also had to press me to complete the job on time because it was only the single most important mailing of the year. And we did, we got it out.
I never proposed anything as irresponsibly clever for the rest of my tenure.
Posted by pengo at 12:00 AM