Twenty-five years ago my wife Toni moved here from New York City. We did not know at that time we would be married, we didn’t know any of this. My first marriage was over, my first theater company in the rearview mirror.

I had a new project, though. I was to start a series of late night productions at Dobama Theatre. I had proposed two ideas, an evening of short plays written by twenty-something actors about their experiences as adolescents and children in the year 1980, and a long-form improv based on the MTV reality program The Real World.

The first was an idea I had proposed once or twice at Guerrilla, using our skills as writers of brief plays to compose an entire show on a single theme, but it never came to fruition. Long form improv was something I also wanted to experiment with, but had no skill or training in it. I just knew it existed.

Before starting this new job, Toni and I decided to take our first road trip. It was a test of our new relationship, it was also terribly indulgent. We enjoyed room service and each other, and checked out historical sights and tourist traps on our way up to the Twin Cities to spend a few days with my brother, Denny.

I was also compelled to see as many non-traditional performances as possible, as though any one of them might provide me with insight or ideas to steal for this new project. It was a mania. Looking back, I am shocked by how many shows we saw on this trip, and how many ideas for the Night Kitchen actually did originate on this journey.

The following italicized passages are excerpts from my journal.


Thursday, July 6, 1995 - Chicago
We saw “Harold” (sic) at the Improv Olympics (sic) … it appeared as though there were very few rules … they would take one word (mine: moon rocks) and make a half-hour piece out of it. It went everywhere and always came back to the central theme.

I wonder how much was planned and how much they were truly winging it.

This was the period when both Tina Fey and Amy Poehler were working at IO (Improv Olympic), and so the odds are good we saw at least one of them that night, but there’s absolutely no way to prove that.

Regardless, deconstructing what I saw this one night formed the basis of my directing concept for The Realistic World, and pretty much every long form I have directed since. Perhaps I should have taken a class.


Friday, July 7, 1995 - Chicago
Saw "Some People" and "Too Much Light" ... In “Some People” Danny Hoch (24 yrs old, fm NYC) portrays eleven different people … to blur the line between “we” and “them.” It made Toni miss NY … the only kind of theater worth doing, theater that teaches, that instructs, that makes you leave with more than a smile on your face.

Special note: Remember all the disenfranchised Generation X’ers w/multi-color hair hanging out under the “L” asking for change.

This last sentence is a line I included almost word-for-word in the text for The Vampyres.


Saturday, July 8, 1995 - Chicago
We saw “Klown” Unbelievable. Helmut Voelker, with the big forehead, unwavering, glassy-eyed stare and gaped mouth, piercing high laugh, he couldn’t break eggs except on his head, he was so frightening and pitiful, REMEMBER HIM … like a wild animal. He frightened me. And when his hand was hit by a mallet or his penis was cut off, or his gift of a rose was refused, he howled and cried so pitifully … I remember “Incomparable Pablo” at O.U. An evil little clown show, but those kinds are so powerful.

Late last year I wrote more about evil clown shows, including Die Hanswurst Klown: Pick Us and We’ll Burst, and you can read about that here.


Sunday, July 9, 1995 - Milwaukee
“Realistic World” idea I came up with in the shower … open show with introductions; one character has a monologue describing (improvised, of course) an uncomfortable event that took place “the other day.” Then all those involved act it out.

Unknown to me, IO had by this time already featured a program called “The Real, Real World.” I am sure it was hilarious, I was always aiming for a king of improvised cinéma vérité, which is not necessarily a good thing.


Break. The “narrator” comes out and gets a volunteer from the audience to describe something real that happened and then the characters act that out, taking it to a different (or who knows, maybe not) conclusion.

The very first time we did this opening night of The Realistic World, I asked someone in the audience what they did earlier that day and they said they had attended a funeral. I literally froze, literally. I turned into actual ice.


Another idea: give audience members the opportunity for additional participation by inviting them to wear a (button, ribbon, toilet paper) and if an actor needs someone new in a scene, they can just pick someone out and use them. Brilliant, no?

No. That is another fucking terrible idea.

Not a particularly inspired entry, but I am amused now by the fact was I was spending so much time fretting about my impending responsibility. You can read more about Bummer here.


Tuesday, July 11, 1995 - Spring Green, WI
Taliesin -- the home of Frank Lloyd Wright … (the studio) even has a little theater … a curtain designed by his students for his 90th (?) birthday … It smelled a bit mildewy but it was a theater. I’d love to mount a whole Shakespeare on that tiny stage.

From there to the House on the Rock. Monstrous! The most gifted architect in American history in the same town as this incredible, unbelievable THING.

It was like a real-life nightmare, all twisty & turny & dark -- were we indoors? underground?

The music machines … The Mikado. Glistening, gilded and red. The song it played, “Danse Macabre” -- I could have cried. Frightening! I will use it in the “Vicious Cabaret.” 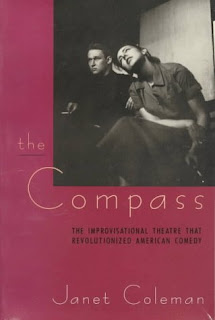 True to my word, we did use the recording of the "Mikado" machine as the opening theme for This Vicious Cabaret.


Wednesday, July 12, 1995 - Winona, WI
(in a coffee house) "The Compass"
p. 42 Die Schmiere, “it means ‘smearer’ or something. It’s a cabaret which puts everything down.”
P. 43 Latin: Provisus, past participle of provider, i.e. To provide, providence, “to see ahead”
the negative, “improvisus” - unforeseen

Janet Coleman’s book The Compass was a revelation to me, about improvisation and, coupled with Jeff Weingrad and Doug Hill’s Saturday Night, about the corporate whoring of modern comedy. It was a foundational book for my award-winning play one-act This Is The Times.


Thursday, July 13, 1995 - St. Paul, MN
It was 102° today. Toni and I decided to give ourselves a break and just sit in a cold theater and watch a movie. But the place up the street (by Macalester) had their a/c busted and so we drove all the way into Minneapolis to see "Apollo 13."

This was the weekend that over seven hundred people died in Chicago during the heatwave of 1995.


Friday, July 14, 1995 - St. Paul, MN
I dreamed again last night about showing up to the first "Bummer" rehearsal without anything prepared.

Toni, my brother and I went out to see an improv show in a bowling alley. They have this little theater on the side. The troupe was called "Jump Up and Run." We three were the only ones in the audience, so we got our money back.

They “rehearsed” for us. They did two pieces, one called THX (“the three of you are listening”) where they act out a mundane activity (bowling) and two of them on microphones make the sound effects.

Then they did a musical based on a decade (Denny said 1850s) and an object (pasta). It was pretty funny.

This fascinating cabaret space is at the Bryant-Lake Bowl. Several years later, when I was performing the Minnesota Fringe I caught a couple shows there, and I have to say there is nothing like being served a big fat cheeseburger, fries and a beer in the middle of a one-man solo performance of Hamlet. You can read more about that here.

Then we returned to the Bryant-Lake Bowl and caught an 11 PM performance of "The Young and the Weightless." Now there were more people in the audience.

A science fiction, musical soap opera. All improvised, they included what happened last week in the program.

They had a tendency to talk over each other, or to wait for someone to say anything. The funniest ones in the show were from "Jump Up and Run" … for the most part the whole experiment was fun, enjoyable to watch, etc. I am inspired.

I am also ready to go home.

Sources:
"Funny Business" by Sid Smith, Chicago Tribune (4/9/1995)
"The Compass, The Improvisational Theatre that Revolutionised American Comedy" by Janet Coleman, University of Chicago Press (1990)
Posted by pengo at 12:00 AM