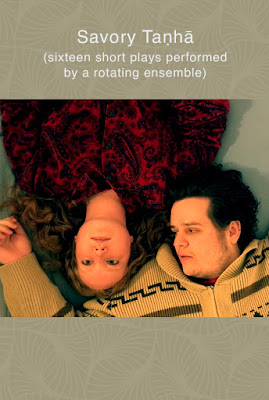 They’re not all good, to be sure. But most of them are, I think. There is some repetition, repetition of theme, or style. Sense of humor. It’s all me. These are the scripts I have been offering to anyone who would like to create a video for the Short Play Project.

More recently I received an offer from Cleveland Public Theatre to curate an evening of short plays for their current Encounters (Here and Now) Series.

To create a sense of community and immediacy, CPT has eschewed the current trend to post performances online for enjoyment at any time, choosing instead to produce live performances through which an audience has the opportunity to interact before and after a show (like you do) and that the shows themselves are like an actual theater experience in that, if you miss it, you missed it.

Choosing the right combination of plays for this forty-minute production has been a curious challenge. I had asked CPT Artistic Director Raymond Bobgan for some feedback, a reflection of what he or others may see in my work which folks respond to. He said it was my themes of longing, passion, melancholy, desire, nostalgia … these are not wistful emotions I have come to in my middle years. I was nostalgic for the 1970s before they were even over, and that was when I was ten.

Regret, mourning, coping with my mother’s death, reevaluating my choices as a younger man … I will be honest. This is not necessarily the first thing I would choose to present right now, during the pandemic, during the uprising. But in the midst of chaos we are still engaged in life, and I am content to offer these sixteen short plays as a reflection of all of our relationships, our fears and hopes and doubts and dreams.

And of course, I need to be clever. To protest my own ability to write works for people from all walks of life, we cast five actors who will read different roles each of the three evenings it will be performed. The text remains the same, the interpersonal reactions are different.

For the title, I wanted something which captured this sense of longing, without sounding overwrought. Or pretentious. That was meant to be a joke.

Constant Craving, the title of that k.d. lang song came to mind. And Savory Taṇhā is a variation of that. Savory is one of my love's favorite words. Taṇhā is the desire to return, to repeat, to stay in one place. Not to move on. The living bardo. It is a cause of human suffering, the inability to accept change.

But it tastes so good.