"The Infinite Wrench" at The Neo-Futurarium 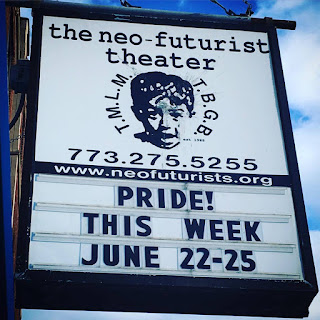 This week the family is enjoying a few days in Chicago, following a weekend wedding in Aurora, Illinois. The kids haven’t been here since before they can remember and we have a full slate of touristy things planned for them, city walks and museums and so on.

My son is already familiar with the Neo-Futurists. He has listened to the CD recording they produced in the late 1990s of sketches from Too Much Light Makes The Baby Go Blind (an attempt to perform 30 plays in 60 minutes). He became a fan of the work and wistfully remarked he would like to see the show some day, but only if they sell out because he wanted the pizza.

When they sell out, they “order out.” Get it? One large pizza, divided more or less equally among two hundred audience members.

Following the election, I was surprised to read that Neo-Futurists founder Greg Allen had announced he was pulling the rights to Too Much Light (TML) with plans to create a new version designed specifically to "combat the tyranny of censorship and oppression." I posted something on Facebook about the announcement, ignorant of the larger story at play.


I assumed he was disbanding the current troupe of Neo-Futurists, unaware that he left the company several years ago. He doesn’t own the rights to the name Neo-Futurists, in fact there are permanent companies in New York and San Francisco, he only owns the rights to the name “Too Much Light Makes The Baby Go Blind” and licenses the concept to these companies and any others who wish to create their own version of the show. He had pulled the rights to perform TML from the Chicago branch only.

Long story short and without getting into any more details, the NY and SF troupes dropped TML in solidarity with the Chicago troupe and worked to create a new framing concept which is called The Infinite Wrench. That is the name of the show we saw last night.

And it’s virtually the same as TML in all the ways that matter.

Twenty-five years ago my colleagues and I contacted the Neo-Futurists to speak with them about their work and to let them know we were hard at work on our own late night program of very short plays performed in a random order, inspired by TML. There were a few brief questions.

Q: Do you call the play Too Much Light Makes the Baby Go Blind?
A: No.

Q: Do you call yourselves Neo-Futurists?
A: No.

Q: Are you performing any written work previously written by Neo-Futurists and performed in Too Much Light Makes the Baby Go Blind?
A: No.

And that was about it. Our format was reverse engineered from theirs, presented in the style of a TV game show, but how can you copyright the idea of performing short plays, even when presented in a randomly decided order?

So it goes with The Infinite Wrench. They were stripped of the iconic title but otherwise the show functions much as it always has.

I cannot recall the last time I saw them perform, but it was certainly before the children were born. The baton has passed entirely from those members of Generation X who made the core company when I first saw them in 1991 – many who have made their mark far beyond the Neo-Futurists, like Ayun Halliday, Greg Kotis, Spencer Kayden, Lusia Strus – to these Millennials.

The differences are subtle, where they are even apparent. Most striking were the emotional, thematic, substantive similarities. There is a philosophy behind writing for this show, for being a member of this company.

Improv comedy troupes like to promote the idea that improvisation means every show is different, when the exact opposite is true. Just because you have no script does not mean every iteration of Party Quirks doesn’t feel like every other performance of Party Quirks.

Yet there is an inherent spontaneity to the writing of the Neo-Futurists, the fast-paced rolling out of the sketches throws an audience member's expectations off-kilter. Many works I experienced last night have the some loopy vibe as those I saw a quarter-century ago, though much of the issues and events addressed are intimately tied to those today.

And this filled me with an intense personal melancholy, as I realized something I thought I understood before but was finally brought into sharp relief. We tried to bring the spirit of TML into our work in Cleveland, but we had no philosophy. We had rules about content, which is not the same thing.

One of the main tenets of The Neo-Futurists is that they do not imitate life, they present it. They never do impressions, they always perform themselves. This is not strictly accurate, one performer last night was a dog, for example – but this was in the service of telling someone else’s story.

When I was twenty-four and twenty-five years old I wrote some great short plays for our show. Those two years spent writing and writing and writing, thinking about writing when I wasn’t actually writing, I learned and grew in my practice every day, laying the groundwork for my future work. But I was entirely immature and unprepared to tap into the kind of emotional honesty present in any single play I saw in just this one performance of The Infinite Wrench. 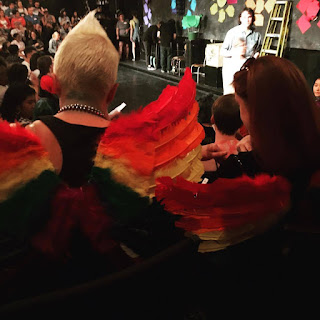 Last night’s show was a special show, however. Yesterday was the Chicago Pride Parade, and this was the annual "30 Queer Plays In 60 Straight Minutes" performance. The company does not necessarily discourage parents from bringing younger audience members but also could not promise the content to be “appropriate” for them. Our definition of appropriate is different from most people's and I am much more concerned with all the violence my son perpetrates through his video games than watching a series of silent, brief vignettes which describe one intimate evening in a lesbian relationship.

It might also be pointed out that my children are not unaware of LGBT issues. In fact, issues of inclusion and equality are very important to them. It was all cool.

The Neo-Futurists continue, as relevant and fascinating and fresh as when I first experienced their work. It was an inspiration and a reminder.

Email ThisBlogThis!Share to TwitterShare to FacebookShare to Pinterest
Labels: Chicago, Guerrilla Theater Company, The Infinite Wrench, The Neo-Futurists, Too Much Light Makes The Baby Go Blind