On the Dark Side of Twilight: Lorain County Community College 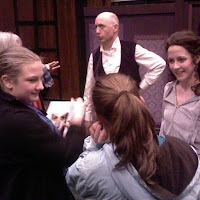 Very good second night, at Lorain County Community College. We did have one drunk guy who answered his cellphone and took the call during one of my narrations, so I told him I would wait until he was done. What is this, TV?

However, the rest of the evening was just fabulous, and a real education. There were a number of folks, younger ones, who showed up because of the Morning Journal article on Sunday, and were out to see some vampires.

During the first arc, I was worried we may have lost them, but apparently the opposite was true. What do you expect, when you came for something Twilight related and instead we begin with a pithy riposte like "my intentions are all one might expect on such an occasion" (that's original Polidori)? You might be turned off. 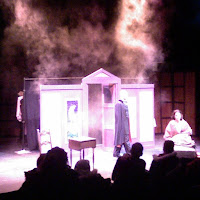 However, the teens in attendance were rapt, thinking, "okay, this is new, but I'm with you." By the middle of the Dracula sequence, they were loosening up, and I think they understood there was some comedy involved.

So, by the fourth arc, we had them. Lots of positive feedback following the performance. One guy really liked the fight scenes (yay, Dusten!) and a girl asked ... well, I can't really say what she asked, without giving away some secrets. But Emily and I had an interestingly cryptic back-and-forth during the discussion. Honestly, Emily, you can say absolutely anything you want. 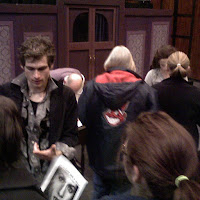 Translation:  I watched "On the Dark Side of Twilight". It had a very simple décor, but David Hansen's text was very beautiful. The vampire stories of Polidori, Bram Stoker, Anne Rice, and Stephenie Meyer are intertwined into a parody.

It ends with postmodern, blood-free vampires, but it also ties into the first story from 200 years ago. Familiar movie scenes are represented; the same words, but this time it's really funny!

Email ThisBlogThis!Share to TwitterShare to FacebookShare to Pinterest
Labels: Great Lakes Theater, LCCC, Morning Journal, On the Dark Side of Twilight