On the Dark Side of Twilight: Jennings Center for Older Adults 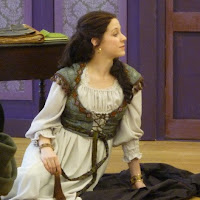 I wasn't sure about turn-out for an early afternoon performance at the Jennings Center. Who goes to a 1:30 show on a Saturday? But we had a really great mix of residents and visitors, not only children and grandchildren of folks who live there, but also some really good friends, too.

Brian, who read my roles in the first reading of the script back in November, brought his eleven year-old daughter. She loves vampires (real vampires, not ones that sparkle) and she said she enjoyed the show. Win!

Got a new fog machine, but this one makes a terrible sputtering noise when it is doing it's work. Sometimes that doesn't matter but it is an unhelpful distraction. Our company of three has been working together very well unloading and loading the set, it's really getting down to a science. Instead of showing up two hours early, we may soon only need a ninety minute appearance before shows.
Posted by pengo at 12:00 AM

Email ThisBlogThis!Share to TwitterShare to FacebookShare to Pinterest
Labels: Great Lakes Theater, Jennings Center, On the Dark Side of Twilight