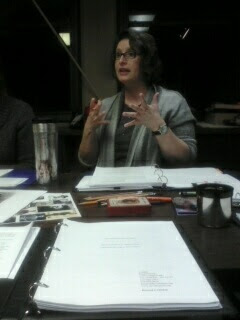 Director Lisa expalins all the wibby-wobbly, timey-wimey ... stuff.
Emily joined us last night, now we are four. It wasn't so much a table session as a sit down, stand up, wander around the room work session. This was good, I have some very definite choreography regarding where Poirot finds clues. We have less then three weeks. I want to know where I am looking, going, crouching.

Trying to make sense of a carefully crafted mystery which has been condensed is a, well, it's a mystery is what it is. Luckily the source material is strong enough (and my adaptation so painfully awesome) that most head-scratchers can eventually be understood. At least I hope so. I continue to cut my lines. Who wrote this play? That's right, I did.

One of Lisa's great concerns at the moment are appropriate accents. Mine is a lost cause, I even started doing Schwarzenegger, no idea where I got on that train. She has promised English accent tapes and an English warm-up exercise, and strongly recommends a steady diet of Downton Abbey, Sherlock, and Doctor Who.
Posted by pengo at 8:30 AM