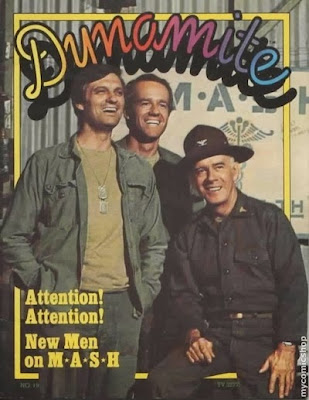 On any given Friday evening in early 1976, you could tune into CBS at 8:30 PM to view a brand new episode of M*A*S*H (and then switch over to NBC for The Rockford Files.)

This fourth season of the program marked two notable transitions from the Robert Altman film upon which it was based (the movie having been inspired, sort of, by the book by Richard Hooker) with the departure of two major characters, "Trapper" John McIntyre and Colonel Henry Blake. Characters original to the series now included B.J. Hunnicut and Colonel Sherman Potter (seen right.)

The character of Trapper John was always the sidekick to what had swiftly become the leading role in the series, that of Benjamin "Hawkeye" Pierce, and upon repeated viewings (countless repeated viewings) Trapper was always my favorite character. I am not sure why any longer, there was not much "there" there, but my emulation of him as a pre-adolescent was probably in keeping with my self-image as sidekick to my more popular best-friends.

The characters of Hunnicut and Potter had much in common, in that they were dedicated family men, much more earnest and much less zany than the philandering, alcoholic characters they were replacing. This was in keeping with the tone of the show, which was moving from laugh-fest into a weekly sermon on everything Liberal. A steady diet of Alan Alda, two episodes every Monday through Friday from 7 - 8 PM on Channel 43, made me the knee-jerk, bleeding-hearted Communist I am today.

This fourth season was particularly difficult for Larry Linville, who played the clownish Major Frank Burns. Portrayed in the film by Robert Duvall, Burns was the subject of scorn and derision for his piety and patriotism, though he did seem menacing in his way and in that context his comeuppance (taken from the camp in a straightjacket after attacking Hawkeye) satisfies. However, by the mid-70s, ridiculing Burns' Christianity and love of country seemed churlish and unsympathetic, and so Linville's Burns degenerated into a wimpy boor of no particular stripe. Just irritating and whiny. 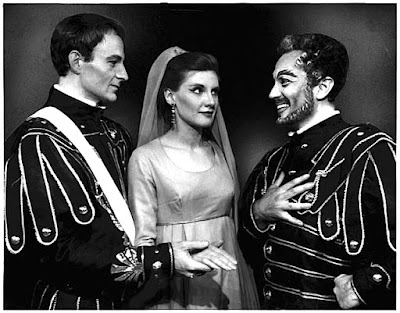 Lawrence Lavon Linville (September 29, 1939 – April 10, 2000) is one of few Americans selected to train at the prestigious Royal Academy of Dramatic Arts in London, England. Unlike Wayne "Trapper" Rogers and McLean "Henry Blake" Stevenson, who left M*A*S*H with plans of capitalizing on their success as lead performers in other shows (and failing, spectacularly) Linville left when his original, five-season contract expired, because his character simply had nowhere to go. Even Burns' former lover, Margaret "Hotlips" Houlihan, was becoming a more sympathetic multi-dimensional character. Unfortunately for this classically trained actor, his life after-M*A*S*H was consisted largely of unremarkable television appearances where he played much the same guy he did in this program.

During the mid-1960s Larry Linville was a company member at Great Lakes Shakespeare Festival in Lakewood, where he worked alongside his second wife, Kate Greer (Linville was married five times.) Linville not only performed at GLSF, he also directed.