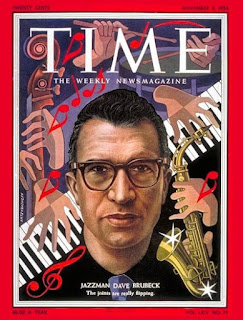 David Warren "Dave" Brubeck (born December 6, 1920) is the swingingest. He was almost kicked out of conservatory because he couldn't read music, but his talent was so great they let him graduate with the understanding that he would never teach.

Serving in World War II he was allowed to create an ensemble (one of the first integrated musical combos in the Army) and met saxophonist Paul Desmond, with whom he would create his most legendary work.


"This is incredible music, jazz or whatever, and you should buy it."
— Down Beat review of Jazz at Oberlin

Brubeck once cancelled a television appearance when he discovered they intended to keep his African-American bassist, "The Senator" Eugene Wright, off-camera.

It is true, there were those serious jazz fans during the 1950s who called Brubeck's work "Europeanised and overly formal." Without soul. You know what I'm saying.

But I wish to announce the opening of new sessions, and new fields, Daddy-o! Hello, Dave!