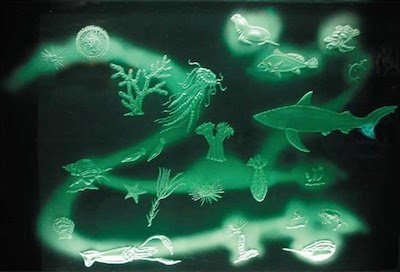 Sculpted glass by Michael Yates
Designed for the Cleveland Aquarium, 1957
Now on display in Primates, Cat & Aquatics House
at the Cleveland Metroparks Zoo
(Spotted it there with the kids today.)

The Cleveland Aquarium opened at Gordon Park near East 72nd Street on September 6, 1954, owned by the city of Cleveland and operated by the Natural History Museum. It occupied space that was once a WPA constructed bathhouse. Yes.

The Natural History Museum converted the bathhouse into a Trailside Museum, but the construction of Interstate 90 cut the CMNH property in half and they relocated their main exhibits to the (present) University Circle location and closed this building. Completion to that section of I-90 made the building accessible again, and it was made into the aquarium. 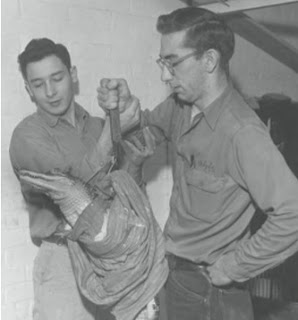 The entire endeavor was accomplished by the volunteers of the Cleveland Aquarium Society, offering thousands of hours of their time to create this modest-sized exhibition space.

And at least one alligator (see right.)

For thirty years it was a very popular place to go, but prices were kept intentionally low and it never created much profit. In 1985 the building closed due to structural problems, a year later its exhibits were transferred to the Cleveland Metroparks Zoo.

UPDATE: The not-for-profit Cleveland Aquarium Society still exists today. However, they are not associated with the Greater Cleveland Aquarium opening in the Powerhouse in Flats on January 21, 2012 which is a for-profit venture developed by New Zealand-based Marinescape.