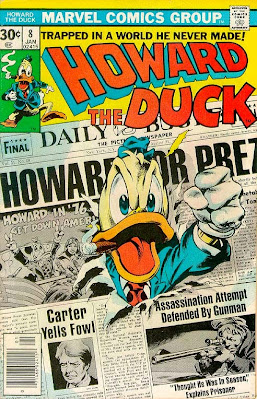 Howard the Duck changed my life, but I never realized in what way nor how much until I began to re-read them this week. My entire childhood was colored by my exposure to this Marvel comic book, the way I spoke, the way I wrote. This was not necessarily a good thing, I do not recommend letting anyone under high school age read this comic book. I began when I was only nine.

Back up ... Howard the Duck is known to most as a terrible film produced by George Lucas from the mid-1980s. I won't bother going into that. The character debuted in 1973 in Marvel's pulp title Adventure Into Fear, a minor character originally written by Steve Gerber and drawn by Clevelander Val Mayerik. He resurfaced in a few issues of Man-Thing before landing in his own title in 1976.

Prior to Giant Size Man-Thing #4 (an annual) this duck, from a world Gerber never gave a name (though later writers formally named it Duckworld, which is irritating because we don't call Earth People Planet) where ducks are the dominant life-form is summoned with others to a nexus in the cosmos to fight some evil entity, whatever. Trying to get home, he is accidentally dropped on Earth, in the city of Cleveland.

Why did I become attached to this comic at such an early age? My brother was reading Spider-Man, the Fantastic Four (we were strictly a Marvel home - always the underdogs, we Hansens) I was trying to find a storyline that I could own. A talking, sarcastic duck? In Cleveland? Sweet! The fact is, I didn't understand half of it, and therein lies the problem.

As conceived by Gerber, this book was pure satire, or parody. Depended on the issue. The villains were a mash-up of pathetic professional types empowered with bizarre and punny abilities. A lot of them are artists. The night watchman who can't get a book published is possessed by a turnip from space - the man, locked in his head wants an outlet for his imagination, the root vegetable from outer space (just writing that makes me smile) wants to know the pleasures of the flesh. Every issue, Howard encounters a character like that, and has to deal with it, often rising to heroism he did not know he had.

Because Howard is a curmudgeon, a cigar-chomping misanthrope who just wants to go home, and is stuck in 1970s Cleveland, the only city at that time worse off than New York City. But even Cleveland is not Cleveland. I cannot find any evidence that he ever lived here, or even spent any time here (Gerber died in 2008) - but original HTD artist Val Mayerik did, even once creating work for American Splendor. But an advertisement for a martial arts course in issue #3 prominently lists the address as the corner of "Oak" and "Elm." Either Gerber was crossing his fingers, hoping Cleveland, like most cities, has streets bearing these names that intersect ... or he didn't care. Cleveland, like everything in this comic, is a symbol for something else. Howard had to end up somewhere unsexy. Cleveland it is.

The main problem with my reading it at such a young age was that I did not understand what was being commented upon. An evil wizard accountant? Becoming a candidate for President for the All Night Party? I acquired a language for sarcasm and acidity without having anything to direct it at. Howard disdains hypocrisy, fads and fashion, rude people ... but his constant barrage of attitude against these mundane evils just struck this child as being disgruntled=funny. I missed his compassion, his acts of kindness - he's a good guy, he's just sick of everybody's shit.