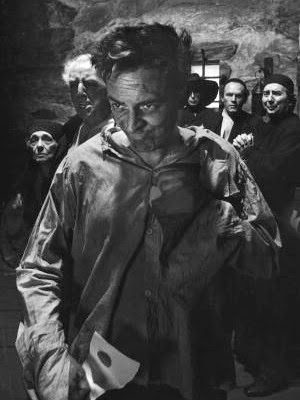 Arthur Kennedy (February 17, 1914 – January 5, 1990) was born in Worcester, Massachusetts (full name: John Arthur Kennedy) and received a degree in theater from Carnegie Mellon, where they still give an annual award in his name. He was a notable film actor, probably known to most Americans for his performances in Westerns. He was also a remarkable stage actor, originating the role of Biff in Arthur Miller’s Death of a Salesman (for which he won a Tony Award) and that of John Proctor in the 1953 Broadway production of The Crucible.

Brooks Atkinson in the The New York Times praised that production, calling Kennedy’s performance “superb” and that he is “clear and resolute, full of fire, searching his own mind.” Atkinson goes on to report that “Although 'The Crucible' is a powerful drama, it stands second to Death of a Salesman as a work of art.”


“The literary style is cruder. The early motivation is muffled in the uproar of the opening scene, and the theme does not develop with the simple eloquence of 'Death of a Salesman'.

“Miller has tried to pack too much inside his drama, and that he has permitted himself to be concerned more with the technique of the witch hunt than with its humanity. By the standards of 'Death of a Salesman', there is too much excitement and not enough emotion in 'The Crucible'.”

This is nonsense, of course. While the issues of Salesman may continue to resonate into the 21st century, its language and style become increasingly stilted and dated while Crucible becomes more poignant - or to look at it another way, I care about the characters in Crucible, and I dislike absolutely everyone in Salesman.

Cleveland Press theater critic Tony Mastroianni interviewed Kennedy in 1965 while he was playing a convict in the Steve McQueen film Nevada Smith. During this interview Kennedy spoke about his time in Cleveland, working as a performer at the Old Globe Theater at the Great Lakes Exposition. One particular piece of information will be painfully trenchant to all my little Cleveland theater friends, and teach them that things today are as they have ever been.


“No, we didn’t use any Clevelanders. It was an imported company.”