Recently, a theater critic lamented on Twitter the lack of “trigger warning” for the musical Six.

Trigger warning: a statement cautioning that content (as in a text, video, or class) may be disturbing or upsetting - Merriam Webster

I know little about Six, a British musical which recently opened on Broadway following an eighteen month postponement. What I do know is that it is a celebration of the wives of King Henry VIII, each of them modeled after a contemporary pop star. It is presentational, like one of those rock music competition television programs.

The suggestion that the show requires a warning of disturbing content led to a great deal of theater twitter tweeting, much of it centered on how dumb a person needs to be not to be aware that Anne Boelyn and Catherine Howard were beheaded, or that Henry was generally an abusive husband. 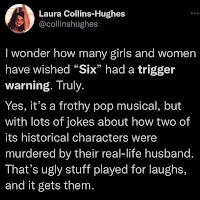 Two things. 1) Why should an American know that? The British Monarchy is not part of our curriculum. And 2) The show isn’t really sold that way. The advertising shows a diverse sextet of women with microphones. They’re not even wearing crowns.

Sure, I know who they represent, I do Shakespeare. I don’t look down upon those who do not.

I have thought a lot about trigger warnings, and I have decided they don’t trouble me, and they may help those who could use such advance warning. “This program makes light of spousal abuse and murder, please be advised.”

Dear Evan Hansen was part of our subscription package for the KeyBank Broadway series two years ago, and apparently it was a popular show with “the kids.” We took the family. My stomach bottomed out when one of the characters dies by suicide. I had no idea. My teenage children have exeperience with suicide, it’s not some abstract concept. It made for a difficult evening.

I understand, life is full of challenging experiences, but like those going to see Six on Broadway, we expected a fun evening. Hell, we paid for one.

This school year, we have introduced a warning to the final scenes of Romeo and Juliet our actor-teachers perform in the classroom. Surely, you ask, they know Romeo and Juliet take their own lives. No, maybe they don’t. Some schools bring us in before they have finished the text. And many students know someone who has died by suicide, and watching that act performed with the degree of realism our actors bring to the performance may be troubling, whether they know the ending of the play or not.

So yeah, I fail to see how a content warning in any way mars one’s enjoyment of a performance. That is unless you are the kind of person who thinks they are stupid in which case I might ask, why so sensitive?
Posted by pengo at 12:00 AM