When I was a kid, I would get on a city bus, by myself, and take it to Lakewood. This was when I was ten or eleven. I’d get off on Clifton, and walk a half-mile south to get to Kovacs Comics at 16108 Detroit Ave.

I have this strange memory of a man with these bizarre growths, hanging from his face. They were like spheres of flesh, hanging from stretched tethers of skin. I found it horrifying, and only glanced at him and looked away. His face was unreal, grotesque.

Years later, in a novelty shop, I saw a rubber mask featuring the exact same, bizarre deformity, and I wonder, was that man real? Did I conflate some memories? Or was the guy on the bus wearing that mask and I couldn’t tell?

Anyway there I was, a child, on the RTA, on my own. Freedom! I can’t imagine my kids wanting to do that.

I had a flyer from Mister Fantasy’s (15015 Detroit) and it was just an ad for the store. All the comics shops did that, printed up flyers to put into each bag of comics you bought.
This flyer featured an original comic. “Mr. Fantasy” was direct addressing the reader, talking about how the store was closing, and that this was the last comic. Mr. Fantasy was a big bearded guy, the stereotypical image of a guy who owned a comic book store.

Thing was, though the comic was cheeky and cheery, in the last panel the character had shot himself. It was just a blood-spattered wall.

In 1981 or 1982, I was introduced to North Starr Comics. Originally it was a mail order concern, operated out of this guy’s basement in Fairview Park. But he had fixed up his basement the way you would a store, and my friend Tom brought me there. It was so cool, like a comic book speakeasy. If you knew the password, you could browse and buy and hang out and shoot the shit.

By 1983 he’d rented a storefront on Lorain Avenue. A proper store, open for business. And there was a regular cast of characters who would hang out there and antagonize each other. Some of us would spend hours there, reading books, watching comings and goings. If you have been paying attention, North Starr Comics was the inspiration for The Negative Zone, my recent comic book project.

Dave, the proprietor, also had fliers. They were usually cheesecake pin-ups drawn by this guy named Phil. And I thought, wouldn’t it be cool if we made a superhero parody featuring characters based on all the guys who hung out at the store?

Looking back, this turned out to be my first public foray into script writing. I wasn’t much of an artist then (am I now?) but Tom was, and so we created The Frantic Four which was full of inside jokes and references.
It’s not for the ages, suffice to say I didn’t know what to write about, things just happened. Mostly it was a goof, inspired by Marvel Comics’ own self-parodies like Not Brand Echh, or the kind of riffing humor you would find in Cracked.
One lesson I am glad I learned early was about unappreciated mockery. We were all in on the joke, but there was one guy who had been the butt of our jokes for some time, and I made him the villain of the story. In his first appearance he was an overweight, diet pop swilling creep who had a cadre of robot servants dressed like high school cheerleaders. We used his actual first name, and the drawing did look like him. 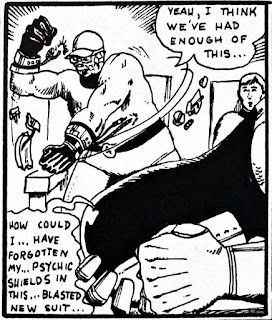 After that "issue" of the comic was produced and distributed, I received a very terse but measured phone call from him (he was in his mid-20s at the time, I was fourteen) explaining to me exactly what the meaning of the legal term "libel" was and recommending I put more thought into my work.
He wasn't wrong. He wasn't wrong at all. It freaked me out. So I had his character unceremoniously murdered by Dr. Doom and never mentioned him by name again.

It is remarkable to me, however, that for a couple years I was producing scripts, that another artist was turning them into pages, and that people actually received them to read (or throw away) in their monthly bag of comics.

My interest in the project waned at the same time my interest in superhero “floppy” comics did. By the time I was a junior in high school I was so engaged in other things, and that was around the time they ret-conned the Jean Grey/Phoenix Saga (if you know, you know) and I was moving on. North Starr closed shop while I was at college, which is as good a metaphor as anything else.
Creating The Negative Zone comic, taking the class, was  quite restorative. I felt like I had the opportunity to rewrite some history I had closed off in my memory, and to remember how enjoyable that period of my life was. It was so easy to dismiss the writing I did for this project as childish and silly. But that's what it was meant to be. And the really important thing to keep in mind is that we did it.
Many thanks to "Frantic Four" co-creator Tom Packis for his amazing artwork!
Posted by pengo at 12:00 AM