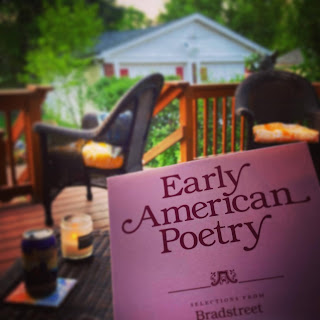 And we’re back. That’s it! That was my summer break. Just kidding, I will get one later. For now, I am taking one, six-week course in early American poetry. Already I am dead chuffed, inspired by the works of Anne Bradstreet to compose a poem about selling my mother’s house.

Tuesday, my son turned sixteen, and I rose early to make him a special breakfast, to celebrate him. By eight I remembered I had not done my morning pages, and it was at that moment that I chose not to.

I chose not to. I wanted to exercise, and then to get right to my work, and not to sit and write. I chose to break a six hundred and eighteen day streak of writing, writing every morning. Because doing so had become a burden. I had to write. I was no longer choosing. It was about the record, not about the process.

I have been working, I have been writing. I have been moving and I will be writing. We begin again, every day, as we all must begin again. And it is with this in mind, that I compose verse about my mother’s belongings.
Posted by pengo at 12:00 AM