The last millennium, as any obnoxious numerology will tell you, ended at the stroke of midnight on December 31, 2000, because we count from one to ten, and not zero to nine.

Anyone with a social life or a personality or friends will tell you oh hell no, I was there and the new millennium began on January 1, 2000 baby, whoop whoop, that was awesome.

Which just goes to show that numbers are only symbols and the majority wins in the marketplace of popular imagination.

The year 2000 was, for me, an ending and not, as it seemed to me at the time, the continuation of a journey upon a determined path. I was newly wed, I had started a popular theater company, I was 32 years of age, and we had plans to start a family. And yet, there was a new me that was about to be born. My first life was about to end, for better or worse, and I was unaware.

The summer of 2000, my wife had left a job at a weekly newspaper to begin grad school, rehearsals were about to commence -- for both of us. Bad Epitaph was producing Cloud 9, and Dobama’s Night Kitchen her new play Angst:84. Late August, twenty years ago, and it was the perfect time to plan a weekend in New York City, to see old friends and even catch a show. We took the train. Time was expansive. We had no kids.

We had even gotten tickets to see Michael Frayn’s Copenhagen at the Royale. Science plays were all the rage, don’t you know. David Auburn’s Proof was transferring to Broadway that fall, Caryl Churchill's 2002 play A Number and Stoppard's Arcadia nine years earlier. Three actors walked in circles around a bare stage ("like particles in an experiment") talking about physics. It was a hit! We used to be smart.

It was a dare, taking a train and buying tickets for a show, and we just made it, too. Heading straight from the station to the theater, we shoved our backpacks under our seats, no time even to pee.

We were staying with her old boyfriend Harris in an apartment on the east side in the 60s. As the three of us made plans for the weekend, he suggested we see a show at the New York International Fringe Festival. I did not know what that was.

That night, my wife was having dinner with an old friend from Sarah Lawrence and so Harris and I had disco sushi at Avenue A and went to see a festival offering, FrankenClown, ostensibly an evil clown show, even promising “several slayings and raucous laughter” but turned out to be a pretty straightforward retelling of Shelley’s classic in clown make-up.

But. My God! Looking through the festival guide, there were over one hundred shows going on across the L.E.S. A happening was happening! I felt vengeful and jealous. Also old.

I thought of the past five years of my life, the several shows we had created in the Night Kitchen, original plays and ensemble-written pieces and long-form improvs, any one of them could have been submitted to this festival -- except it didn’t exist yet. The New York fringe began in 1997, and I left Dobama soon after. Alas.

After the show we caught up with the others and bar-hopped until about four a.m.

The next morning my head and tummy were a little tender and so we lay low for the early afternoon. One of them said something about “CJ doing the thing” and I was the only one in the room who had not yet started watching The West Wing, they had to explain it to me. Harris downloaded “The Jackal” using LimeWire because we could not yet just dial up something from YouTube, so I could hear the song. It was peak Y2K.

That night we had more success with the fringe, joining a packed house at Surf Reality in the East Village to see The Complete Lost Works of Samuel Beckett as Found in an Envelope (partially burned) in a Dustbin in Paris Labeled "Never to be performed. Never. Ever. EVER! Or I'll Sue! I'LL SUE FROM THE GRAVE!!! It was created and performed by Theater Oobleck members Ben Schnieder and Danny Thompson, and Neo-Futurist founder Greg Allen and included elements of each companies’ work, particularly their high-brow loopiness. 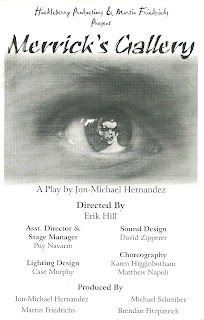 By now I was in the zone and I desperately wanted to see one more show before we left. Sunday afternoon we packed our backpacks and headed back downtown for one more show. We saw the play Merrick's Gallery at the Present Company Theatorium on Stanton Street, headquarters for the entire festival. During intermission I nosed around, trying to gladhand one of the administrators.

I was bitten. This was the next step. Bringing a show to New York to participate in a festival like this was definitely on the agenda for the future. And the opportunity presented itself sooner than I imagined, though not with one of my shows. The Night Kitchen took my wife’s play, Angst:84, to the Fringe the next year, produced right there at the Present Company Theatorium. I ran sound for that production, and during my copious spare time took in sixteen other shows at FringeNYC 2001.

This experience did not start my new life, but in hindsight it was a piece of it. For the better part of ten years I had endeavored to create new works in northeast Ohio, to be a participant in making Cleveland into the theater city I knew it might be. And it's not like I hadn't attending storefront theater before in Chicago, the Twin Cities, New York, London, and elsewhere.

But to be confronted with the sheer massive scope of current theatrical productions, all in one place at one time, was to be more suddenly and deeply engaged in the national and global theater community. There was an element of FOMO to it, to be sure. I wanted in.


I brought three of my own shows to fringe festivals, in New York and elsewhere. Did it make an impact on my career? Maybe. Was it fun? Sure. Did I learn anything? A lot. But it feels like a long time ago. And now I have, at last, started grad school.

Amy Salloway, who I met at the Minnesota Fringe in 2003, she said, "Fringe festivals are summer camp for theater people." For me, however, summer is over.

The former Present Company Theatorium space was demolished to make way for luxury apartments in the late 00s.
Posted by pengo at 12:00 AM