The World Only Spins Forward: The Ascent of Angels In America (book) 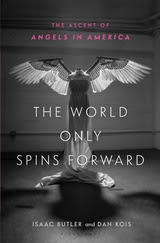 Theater artist Isaac Butler and journalist Dan Kois have contributed an historically important book with The World Only Spins Forward: The Ascent of Angels In America.

A comprehensive oral history, this exciting and easy-to-enjoy record traces the creative path of Angels In America by Tony Kushner, arguably the greatest play of the late twentieth century; from the script’s prehistory in the revolution for gay rights and the origins of the AIDS crisis, through the heady development process on both coasts of America and in England, its resounding though by no means guaranteed acclaim and lauds (and a surprisingly successful adaptation to film) and significant re-mounts, up to and including its recent revival on Broadway.

It even includes a chapter on the ill-fated 1996 Charlotte Repertory Theatre production, which was almost closed due to threats that the cast would be arrested for indecent exposure. The controversy began when the theater critic for the Charlotte Observer took the opportunity of a rare front page byline to announce to the community that this production would feature homosexual acts performed live on stage and full-frontal male nudity.

That those are two different scenes, and the fact that the character Prior Walter removing his clothes was for a medical examination, exposing to the audience his weakened state and many visible skin cancers, was not in the Observer's lede. The alarm was sounded, and it took a Superior Court Judge to allow the play to proceed without fear of legal action.

The controversy continued, a slate of arch conservatives were elected to the Board of Commissioners, and arts funding was -- briefly -- eliminated in the county of Mecklenburg. Shortly after the Charlotte Repertory Theatre would cease operations.

A few short years later that theater critic, Tony Brown, who so titillated the readership of Charlotte, would move to Cleveland and begin an eleven-year tenure as chief theater critic for the Plain Dealer. He was either not asked, or declined invitation to be interviewed for this book.

One of the more startling images from Mike Nichols’ HBO miniseries adaptation is a scene between the doomed couple Harper and Joe, on the rooftop of their apartment in Brooklyn. The Twin Towers are clearly visible across the river. A trick of editing, this record of the play, created in 2003, was one of the early reminders that Angels is a period piece. I mean, it always was; it was and will always be 1985. But what we have gained and what we have lost in the years since, and as the years continue, will continue to mount and shape our perception of Kushner’s work.

And therein lies a question; does this play continue to be relevant? Almost every year a play receives a Pulitzer Prize for Drama, for not only great writing but also social relevance. Many go onto long histories of production, but do they maintain their relevance, do they speak to a modern audience? Plays so familiar that their titles can be reduced to one word -- Streetcar, Salesman, Picnic -- they may be emotionally compelling, but are they urgent?

When the HBO series debuted it, too, won numerous awards. It was well-done. But the dire warnings of the text were not as sharp. HIV/AIDS -- in America at least, for those who could afford it -- was under control. Eight years of Bill Clinton gave the illusion that the Reagan revolution of the 1980s and the Gingrich-led uprising of 1994 were just part of the natural cycle of politics, and that the Supreme Court the character Martin Heller predicted, one that by the 1990s would be “block-solid Republican appointees” had not come to pass and would never do so.

And yet. Here we are.

The question of whether a piece of writing transcends its own time, that its meaning can be interpreted to reflect the crises present in those whose paths are different from those represented in the original narrative, that is the test which determines whether a play is truly classic.

Arthur Miller directed Salesman in Beijing in the early 1980s, just as China was only beginning to enact minor Capitalist reforms. In doing so he found a wide, new audience for a decades old work which affected his audiences as though it were written for them.

Two years ago the Play House produced his Crucible with a multi-racial cast, and I had the opportunity to get into a polite debate about whether doing so changed the intended message of the play. He argued the play is about religious persecution, not racial persecution. I argued it was intended to be about the Red Scare, and about persecution in general, and the kind of heartbreak and death that attends the creation and subsequent destruction of perceived enemies.

The first production of Angels in Cleveland was at Dobama Theatre in 1998, a brisk, delirious event, with tiny sets flying in and out with breakneck speed and an indelible lead performance by Scott Plate as Prior Walter. It was a time when the word “Millennium” was très en vogue, the expectation of great or cataclysmic events just on the horizon. We were living in End Times that never ended.

As we limp further into the murky depths of the twenty-first century, Angels In America, with its deeply flawed but searching characters and lyrical wonderfulness, which provided rich humanity to a cohort of humans previously denied their rights or even their right to exist, has already shown itself to be open to vital reinterpretation. The great work begins. It is always beginning.