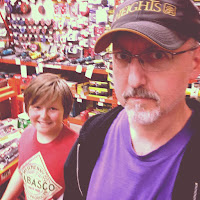 For the eighth year running, the boy and I have been left on our own for a weekend in July, a weekend we refer to as Boy Camp. The truth is, we have plenty of father-son time during the course of any given year. In January my wife and daughter headed to the Women’s March in DC and the boy and I - and Sarah - saw theater, ate poutine and attended the Science Fiction Marathon at Case.

But Boy Camp has become a strong tradition, something we both really look forward to. The weekend has not disappointed. True, we did not go bowling, but we have made a date for the near future. But other stereotypically testosterone-inspired events have transpired.

For example, yes. We began with a trip to Home Depot. Seriously. His call. He has wanted for some time to make his own practice swords, like those we employ in the residency program, and that required ½’ PVC pipe, foam and duct tape. He also bought a dangerous looking utility knife and almost immediately nicked himself with it. Lesson learned, I hope.

We also headed to Game Stop to remit a gift card he’s had, like, two years. His computer and phone have kept him away from that Xbox he bought at the police auction a year or so back, but he only had one controlled. Now he has two and we stayed up late Saturday night playing WWF Smackdown ‘13. 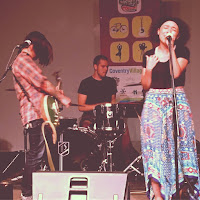 After shopping we headed to Ensemble Theatre, where The Whiskey Hallow was giving a free concert. It should have been out in Pekar Park, but was rescheduled for indoors under threat of heavy storms which never materialized. The bands includes on of the boy’s teachers from School of Rock and a former student, they’re pretty amazing and it was a great show. Wish it could have been outdoors, though.

However, it did afford us the opportunity to check out the ARTFUL artists studios on the second floor of the former Coventry Elementary space. Only two years ago we were rehearsing scenes for Timon of Athens up there, and there was nothing but open, wanting space. Now there are studios and classes, and real work going on.

Unfortunately, the school district plans to sell the building, which puts this new endeavor, Ensemble Theatre, Lake Erie Ink and another important local arts organizations out on the street. I should write a letter.

That evening he made a sword (cut his finger) and we watched three episodes of The West Wing before bed. 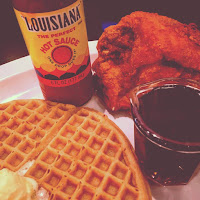 Saturday morning he indulged his father, joining me for a theater-related meeting and bearing through it pretty well. I had promised fried chicken and waffles, which is where we headed directly after - to Chicago’s Home of Chicken and Waffles. Folks in the office have been telling me about this place, and we had a fantastic lunch there. However, I think he learned that real pieces of chicken fry better than the boneless kind.

Before dinner, some exercise. I ran, he biked, some three or so miles through town. We talk about anything on these runs, I am grateful for them. When he comes along on the bike I get water, and take a few breaks. The running has been very challenging the past several months.

Before dinner we had to get bananas, and of course some ridiculous-flavored ice cream. I planned to make fried banana and sunbutter sandwiches, but he persuaded me to slap a piece of cheese on them. He was correct. 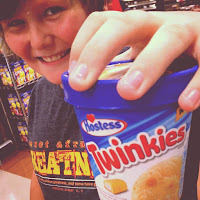 We dined watching Most of Buckaroo Banzai. He really wanted to play Xbox but I suggested we watch something while our hands were occupied with the sandwiches, watermelon, Fritos, and Twinkies ice cream. He agreed, and we made it most of the way through the movie before his desire to lay the smacketh down became too overwhelming.

Now, I had made a promise the night before which I seriously did not feel like keeping this morning, which is this: he wanted to fish. I, having been ill for the past ten days, was delighted to not only sleep through the night, but to sleep late. By nine I had no intention to find somewhere to drop a line during the hottest part of the day.

Fortunately, before he woke some friends called asking if he didn’t want to go with them and their son for the day. And so, Boy Camp drew to a close - for me - a bit early, as I sent him to hang out with his best friend in the beautifully resurrected Edgewater Park.

There’s so much more summer in store. I am sure we will get out into it together soon.
Posted by pengo at 7:02 PM