Ten years ago this month, the Stillbirth and Neonatal Death Charity (SANDS UK) sent my solo performance I Hate This (a play without the baby) on a seven date tour of Great Britain. 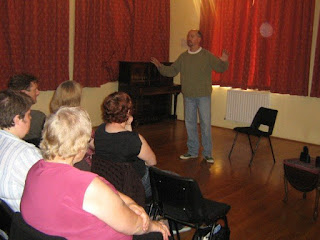 The performance at St. Cuthbert's couldn't have gone smoother. I have been touring I Hate This since 2003. To cut down on expenses, I have always requested that each site provide their own rocking chair, even if I bring everything else. As a result, it's always exciting to see what the chair is going to look like. Carlisle set the record for "Shortest Rocking Chair Ever," but it sure was cute.

Friday my biggest concern was the screen. The projector was no problem but there was no blank wall to cast them on. Our contact tried very hard to find one and came up short. I was also concerned that the light fixtures, electric candelabras, were too dim. Lots of bulbs at the "stage" end of the room were burned out.

Well. Night of, our contact arrives with her husband and her sister and a co-group member. My wife was also on hand and between them, the stage manager and I, figured out every concern in short order -- including dinner, which I always forget to eat on performance nights.

The room was set up with about thirty chairs. They succeeded in finding the only screen in Cumbria so we had that to work with, and our contact's husband "pinched" the lights from the fixtures in the back of the room to fill out those in the front.

There were something short of thirty people in attendance. I was feeling surprisingly relaxed in my delivery. My stage manager said she could tell, that whenever I am comfortable I "mess up" a lot of lines, but fuck her, she's just the fucking stage manager, what does she know. Fuck.

The wife joined me for the post-show discussion, and we met some lovely people over tea and cake following that. I almost forgot to ask our contact about her own experience. I sometimes need to remember, when dealing with bereavement groups (as opposed to, say, medical institutions) that many of the people I am working with have also lost children. And even when I do, well, I guess I wait for them to bring it up. Shame on me. 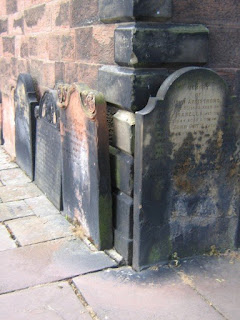 She and her husband lost a boy just shy of one year ago. I had a long talk with him about the boy, and about the way he has dealt with it. Saying our good-byes I wished her a good day on the 28th and that's when the tears started. I felt bad, the way people do, for "bringing it up," which is ridiculous when you think about what I have been doing for the past six years. It also goes to show how ingrained these reactions are.

St. Cuthbert's is a great little church. The sides are lined with old tombstones that, for all appearances, were uprooted from the field next to the building. It's a nice, open space, walled-in. The entire time we were there, all evening, there were young people lying about, eating, drinking, making out, on that space.

I thought it was odd, that they had moved the stones, to make that field. "Why?" my wife asked.

So many of the stones included references to babies that died in infancy. I heard Philip Roth on Terry Gross last week, talking about his book Everyman. The subject was cemeteries, and he noted there how many stones were for children in the old days, and that you don't see that much anymore, because it isn't as much of a problem. I like Philip Roth, but he's been around too long to be that dumb.