The Theater of War (book) 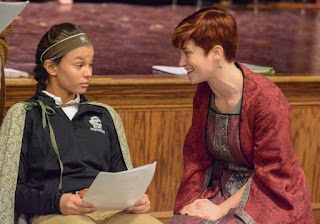 The past week was spent at Elyria Catholic High School. Each January the actor-teachers from the GLT Residency program test out the new lesson plans they have learned over the holidays, working with students in a relaxed atmosphere in which they are free to consult Lisa and myself, even during the class period, though they never do. Everything generally works out the way it is supposed to and we provide notes and feedback and they get to move into this next part of the school year confident that they are conducting the lesson plans correctly.

Yesterday an article appeared in the Morning Journal in which Lisa described our work succinctly, “The teachers have taught the curriculum, but we’re here to enhance the curriculum.” That’s what we do. We “illuminate” these classic texts, to figuratively shine a light on them, to bring certain aspects into focus which might otherwise be lost.

Our people perform scenes, but also coach the students in performing scenes, and also conduct exercises and improvisations, and then debrief with discussions which often relate to personal matters. One of our teachers said, “It allows (my students) to put themselves in the characters.”

Many discussion prompts are tried and true, but many have to change as time goes by, depending on current events, the personality of the actor-teacher asking the question, or even their supervisors’ point of view. The Julius Caesar residency took on a different tone after 9/11, for example. But how much can Romeo and Juliet change? Quite a bit, actually. Girls and boys today find Romeo to be much more of a creepy, obsessive stalker than they did fifteen years ago.

But still, Caesar is about friendship and personal belief and R&J is about love and hate. They get the politics, they get the emotions. But what of Macbeth, what of Hamlet? How best to connect teenagers and not only teenagers but our actors who work with them to the outsized feelings of ambition and horrible acts of violence inherent in these works? It is far too easy to hold the titular characters at arm’s length. 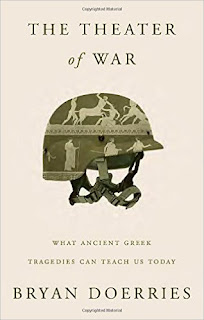 For Christmas my mother-in-law gave me a copy of The Theater of War (What Ancient Greek Tragedies Can Teach Us About Today) by Bryan Doerries. His youthful intention was to become a classicist, studying at Kenyon College to learn Ancient Greek, Latin and Hebrew. For his senior thesis he produced a performance of his own translation of Euripides' Bacchae, transforming a hillside in Gambier, Ohio into a makeshift amphitheater. What followed mutated into an interactive bacchanal which drifted late into the night in the manner you would expect. Text became flesh, and this young man felt he had discovered the power of theatrical performance.

Yes, we have all had that evening it all came together into an amazing you-had-to-be-there performance event. However, it was only when the author had experienced tragedy in his own life that Doerries began to developed his theory for the powerful uses of theatrical performance. He entered into a relationship with a woman with cystic fibrosis. She taught him a great deal about stoicism in the face of anguish, but also how to embrace everything relevant in life and discard all that simply isn’t important.

Her death was on March 20, 2003, the vernal equinox. On that date, my wife and I were celebrating the second birthday of our stillborn son, Calvin. The year before we held that celebration alone, this time with a six-week old baby girl. Something else was new that day, the Iraq War had begun mere hours before. Every new beginning comes from some other beginning's end, am I right?

Doerries theorizes that classic Greek tragedy was not created as entertainment, but as something more significant. Having endured long years of war with the Spartans, dramatists like Aeschylus, Sophocles, and Euripides were most likely themselves soldiers, writing for soldiers to perform, for an audience of soldiers to view.

We today have come to believe that Greek tragedy are cautionary tales, stories of how great men are brought low by something called “fate” and their own “fatal flaw” and we are meant to judge them and learn from their mistakes.

Doerries believes this view to be misguided, and narrow. He states that “tragedy (is) a powerful tool for positive change, one whose vast and untapped potential for propagating healthy responses to stress remains wholly underestimated.”

These soldier audiences watched as figures who had endured trials much like their own make painful, difficult decisions, decisions for which there are often few choices, all of them unhappy. These men were not meant to judge the heroes performed on stage, not even to feel “there but for the grace of the gods go I.” They saw these figures and thought that is me. I have that same pain. I have been tried and I have made those decisions and I a trying to learn how to continue.

“Tragedy … aims to arouse then purify emotions … of their toxic qualities,” the author says.

His company, Outside the Wire presents staged readings of these tragedies for select audiences, followed by open discussion. Ajax tells the story of a maddened and suicidal soldier and has been performed for Iraq and Afghanistan War vets coping with post-traumatic stress, and Prometheus Bound for guards in corrections facilities including Guantanamo Bay.

The Women of Trachis includes scenes of Heracles, horribly suffering from a curse, begging his son for death. This last addresses issues of assisted suicide, and in the book Doerries recounts a controversy which arose when a hospital on Cape Cod commissioned a public performance and then got cold feet when their ethics committee feared such a performance would be a tacit endorsement of euthanasia.

I was reminded of an event from ten years ago I had entirely forgotten about. I was booked to perform I Hate This at a hospital on Long Island, and two months before the event the head of OB/GYN announced the event would require his approval and insisted the read the script. He found it threatening and the performance was cancelled. This wasn’t the first time I had offended the medical community, one performance before nurses in Akron was a complete disaster. It was the end of a long day, and the air conditioning was on the fritz … and yet I could definitely feel a chill in the air as I opened the floor for questions.

Someone eventually raised their hand. “Well. What are we supposed to do?” The way she asked, it was obviously meant to be rhetorical.

But how do we look past the “fatal flaw” idea, and see in characters like Macbeth our own decisions. What constitutes betrayal? Can you break trust with someone you love and respect and ever be the same person again? Can you accept your own transgressions and successfully move past them?

We believe our time unique in its obfuscation and callousness, but what about Hamlet? Is there another play of Shakespeare’s more rife with broken promises, discarded tradition, and repeated, casual deception? How do you live in a world like that and maintain your integrity?
Posted by pengo at 4:35 PM