Last fall I wrote this entry about the Penumbra Theatre's production of Two Trains Running. I was in St. Paul to celebrate my brother's 50th birthday, and my sister-in-law got us tickets to see a show together. It was a marvelous production, and I sheepishly add it was the first time I had ever seen anything by August Wilson.

However, there are several of Wilson's works being produced right here in Cleveland over the next several months, and I was thrilled to learn that not only was the Cleveland Play House producing his last work, Radio Golf, but that they were more or less bringing the Penumbra to Cleveland to create it. 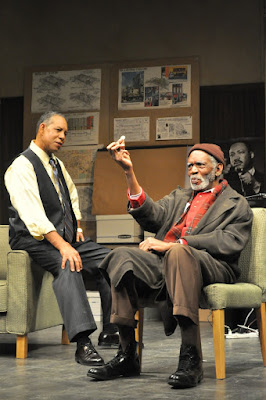 Speaking out of pure ignorance of how the rest of Wilson's Century Cycle plays out (I did read Fences a few years back, as well) I found much in common between Two Trains and Radio Golf. That is not to suggest anything unoriginal in the later work, instead I felt I was engaged in the repetition of a theme, like a musical variation. This was in part due to the fact that in each production, El Ra and Craven played familiar roles. However, though El Ra stands out once more as the supporting character you cannot take your eyes off of, experiencing the differences in Craven's interpretation of Wilks (Radio Golf) as compared to his Memphis (Two Trains Running.) Each play revolves around and eventually culminates in life-altering moments for both men, and what is at stake is as important to each, in their respective stations in life.

His Memphis is the tightly wound owner and operator of a Hill District diner in 1969. Sporting period horn-rimmed glasses, a neatly-trimmed mustache and a fedora indoors, the man rarely smiles. Unhappy with the world around him, his livelihood threatened by "urban renewal" Memphis is holding out for the right price for his property. To state whether or not he comes out on top would give away the ending. So I will just show this picture: 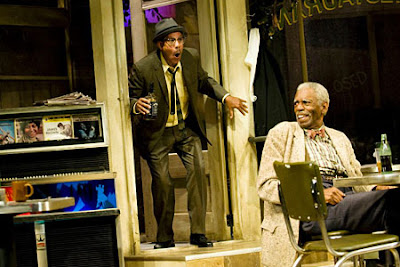 I barely recognized the clean-shaven, constantly smiling real estate developer and mayoral-hopeful Harmond Wilks in Radio Golf (which takes place in 1997) and though Craven's voice is unmistakeable, unlike the mightily controlled Memphis, his Wilks' voice betrays his feelings at every moment, wildly pitching high when excited or to a low gravel depending on the situation.

Before departing for the evening, the parents of our babysitter mentioned in passing that the play is a little long at almost three hours. I have to say I disagree. I mean, if I had my druthers I would venture back to Minneapolis to see every part of the Century Cycle produced by Penumbra (they are doing that, by the way) as I have been twice impressed by the way Lou Bellamy and his company handles the material. Wilson was, at heart, a poet, and his characters come and go and take the time to tell beautifully told stories, and no one stops them. Well played, I have no problem with that at all. 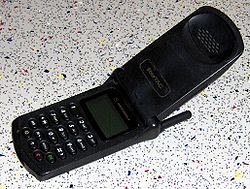 My dates for the evening insisted that the side-mounted flip-phones sported by two of the characters were anachronistic for 1997. This is a Motorola StarTAC, released in January 1996. You lose.

After the show I was fortunate enough to spot El Razzac on his way across the lobby of the Allen Theatre. I'd waited four months to tell him personally how much I admired his work.