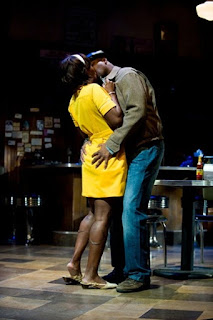 Penumbra Theatre was founded in 1976 by Lou Bellamy in the Shelby/Dale neighborhood of St. Paul to "create a forum for African-American voices." That is where my brother and I headed last night for opening weekend of August Wilson's Two Trains Running.

Before he died in 2005, August Wilson created ten plays, The Pittsburgh Cycle, chronicling the African-American experience through the prism of the Hill District. Each play represents one decade of the twentieth century. While I am shy to admit I have (until last night) read merely one of his works (Fences) by the end of the 2011-12 season I will have seen three, including Gem of the Ocean at Karamu and Radio Golf at the Play House.

Penumbra was responsible for Wilson's first professionally produced play, Black Bart and the Sacred Hills, and their relationship with Wilson remained strong throughout his life, and continues today, as the company decided following his death to produce the entire Pittsburgh Cycle, offering one or two of the works every season since 2007.

The facilities of Penumbra are very warm and welcoming, and the auditorium seats 250 but feels very intimate and close. The set for Lee's Restaurant circa 1969 was strikingly realistic. 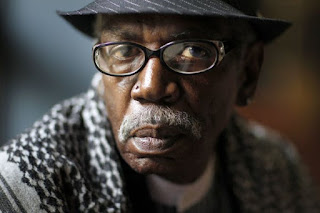 While I was engaged by the entire ensemble, I most enjoyed sharing three hours in the same room as Abdul Salaam El Razzac (b. 1944) in the role of Halloway, a disciple of Aunt Esther, a man who has lived to the age of 65 by minding his own business. At turns kindly or fierce, this 6'5" grey-domed man in a comfortable suit keeps the top from blowing off Lee's ... or casually (but pointedly) makes his way out when he can't.

El Ra (as he is known to his friends) was born Allen Johnson II in Cleveland. Yes, he performed for Karamu, and graduated from East Tech High, the child of a postman and a "public servant." Right out of high school - during the Vietnam War - he joined the Air Force, moving to the Twin Cities after his service.

Sources:
Penumbra website
Star Tribune: The Mellowing of El Ra
Wikipedia
Posted by pengo at 12:56 AM