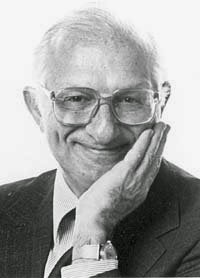 Melvin Helitzer (October 18, 1924 - April 11, 2009) remains a legend at Ohio University, where for decades he was the professor of the Humor Writing for Fun and Profit course, in addition to other journalism classes. The class taught how to write for greeting cards, political speeches, cartoons. It's claim to fame, however, was the final exam which was five minutes of stand-up in front of a sold-out audience of their peers.

In the old days it was held in the Frontier Room, a bar. So the audience was drunk. When the campus went dry and the venue became the Front Room - a coffee house - the audience was still drunk but now also high on caffeine.

Prior to his "retirement" as college professor, Helitzer was one of the "Mad Men" (fo shizz) a Clio-Award winning advertising executive, though his work tended more toward and emphasis on toy companies, cereal and candy than cigarettes and bourbon. Mel was a WWII vet, and a hard-working journalist.

In spite of this sterling reputation, I was a young turk who thought he knew what's what about comedy, and saw Mel Helitzer and his class as Henny Youngman 101.

And so, I was a little confused when the director for Comedians (whose name I cannot recall) invited Mel Helitzer to participate in a symposium on comedy as part of the promotion for the play. I mean, in hindsight, duh, of course, he’s a nationally-known comedy instructor. He was an expert on writing comedy, for stand-up, for print, television, advertising, politics, public speaking. Good gracious, he wrote the Choo-Choo Charlie jingle!

But from my perspective a) he was representative of the kind of fatuous comedy that is sent up as reprehensible and empty in the play in question and b) this 20 year-old thought he was a hack. He did a few minutes of stand-up for our benefit, and every third joke was one I’d heard someone else tell before. It was unbearable. Take my life. Please.

Not to mention the fact that when the director in question did his own five minutes of stand-up at the symposium, it was like hearing watered down Robin Williams. And by 1988, I was already entirely done with Robin Williams.

Which is why, when signing up for winter semester classes, I enrolled in Humor Writing for Fun and Profit. Because in spite of my feeling like I already knew everything about everything, I had enough fire to try and beat the old horse at his own game.

It was challenging, it really was. I am not good at writing comedy. I don’t know how better to put it, but I find it very hard to slow down the thought process in my writing. I know where I am going with something, so I find difficult to spell everything out and bring people along. Gags I come up with seem so obvious I don’t even write them down, and then what I do put on paper is so obscure no one gets it but me. So that was an education. And Mel was invaluable in teaching me about the rule of three (okay, that one is easy) but also timing, set-ups, slow down!

But we had great, enjoyable conflicts about content. My routine was intentionally psychotic, half a series of jokes aimed largely at myself. I refused to make fun of others … except vague others like “ugly people” which could mean anything, and of course, Wham! Unfortunately, the Wham! joke was supposed to just be a weird twist on the old joke about separating the men from the boys in the Greek army, but in hindsight it comes off as homophobic. Sorry about that.

I think the real joke is that I love George Michael, and everybody knows it.

The second half devolves in this uncomfortable Oedipal shaggy dog story, which got laughs, and made people squirm. Mel hated that part AND YET was instrumental in improving upon my delivery. He didn’t like it, but he made it better.

Most people audit Mel’s class. But then you have to pay for it. I wanted to take it for a grade, but then in addition to the live performance, you also have to write a paper. I was going to argue the superiority of improv over stand-up.