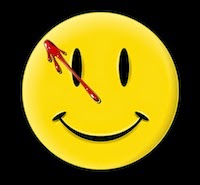 "I should be drinking a toast to absent friends
Instead of these comedians."
Elvis Costello

My junior year was the year of comedy. Stand-up comedy. One of the main stage productions that fall at the Ohio University School of Theatre was Comedians by British playwright Trevor Griffiths. In brief, the play is about an older man who teaches an after-hours course in stand-up to working class guys in Manchester. The final exam is a five-minute routine at a local pub.

However, when the instructor’s old partner shows up, a very successful British comedian and talent agent, and announces he is scouting for new talent and will be attending that night’s event, well, that raises the stakes considerably, doesn’t it?

These two men of a certain age have differing opinions about comedy, and its uses. Morecambe and Wise vs. Angry Young Men, don’t you know. The guy in downtrodden, 1970s era Manchester, scraping his living, thinks of comedy as a time-honored art form best employed to divine difficult truths. The other gentleman is about entertainment and money -- If you can get everyone in the room to laugh at the fat kid in the front row, you win!

Also in 1988, when Tom Hanks was still willing to risk playing an asshole, he starred in the film Punchline, which might be my favorite role he’s played. A middle-aged housewife (Sally Field) is having a midlife crisis and wants to try out stand-up. Hanks' character is a moderately successful, workaday comedian, kind of a dick troubled character, and takes her under his wing.

Comedians, it turns out, are not happy people. They are bitter, angry people. The best ones can be charming, lose themselves in the content of their “character” and who can cleverly cut down everyone around them but remain adored. Caustic, scorched earth comedians offend everyone and most often flame-out. I don't need to name them. The ones with the longest self-life are beloved, unknowable clowns. Who is Jerry Lewis, Bob Hope, Johnny Carson? Who cares, they’re funny.
That school year was also my year of graphic novels. The daily comic strip I had written during my sophomore year had been cancelled, but as a result of that experience I had begun delving beyond strips and books, and into what Art Spiegelman called “comix.”

Junior year was when I began reading Harevy Pekar, Spiegelman’s Maus and Raw, and Watchmen, an underground comic posing as a superhero book. Watchmen famously features a character called The Comedian, an psychopathic mercenary who plays the American system to the hilt, G. Gordon Liddy with the expertise, style and strength of Batman. He wears the iconic “smiley face” button that is the signature gaphic for Watchmen. It’s also his blood that gets splattered on it.

The second act of Comedians features all of the younger performers presenting their shtick. To the playwright’s credit (and the ability of the actors) the routines actually do make the audience, the actual theater audience, laugh -- or not, if they are supposed to be lackluster. All the student had been instructed carefully to look into themselves, to find the humor within. When one comedian’s work begins to flag, he starts making racist jokes which are unfortunately hilarious. Win! A team of brothers have a melt-down onstage, however, when one of them tries to pull the same thing in the middle of their act, and the other refuses to.

The final comedian, Gethin Price, is entirely balls-out bizarre. It’s more like performance art, it isn’t "funny", it’s a grotesque lashing out against the upper class. It is COMEDY. I wasn’t in this production, but I was very interested by it, read the script in advance. I had made acquaintance of the guy playing Price -- he was an O.U. Alum, a visiting artist -- and gave him a Watchmen pin I had gotten from the Uptown Mini Maul. He was thrilled, and got permission from the costumer to pin it on costume.

I like comedy. I like funny. I do not like comedians. In general, I find them to be misanthropic, mean-spirited people. And the only thing worse than a comedian is an improv comedian.