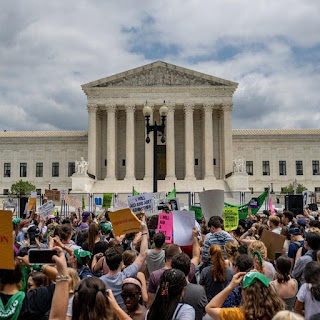 So, I was feeling like I was getting seriously behind in my work and spent all of Sunday and Monday editing the new script for Oatman’s playwriting workshop and by class I had completed a first draft of what I am currently calling After Roe.

What’s crazy is that it actually works.

During my interviews I was asking everyone the same few questions and I was concerned that all the subjects would end up sounding the same. Not only did that not happen (and why was I concerned that it might) but as a result there were several places where they dovetail nicely together, creating what almost sounds like a conversation.

The man thinks I need more hard-edged voices. I’m not sure I can do that. The thing I have decided is that this is not journalism. This is advocacy. And presenting strong voices of opposition, well, first of all, fuck those people, but also, I should inevitably make them sound like assholes and I have enough integrity not to do that.

Am I preaching to the choir with this endeavor? No, I am not. If anything, I am providing an education to those who may not have a broad understanding of the subject, including those who already support the issue.

Which is to say, I spoke with a lot of very intelligent and thoughtful people. It’s their words. I just put it together into an entertaining evening.

Monday I also received certified documents from the state of Ohio which I sent right back out to Jackson County, Missouri. The question now is whether or not I get what I am requesting before the end of the semester. It’s kind of a big deal.
Posted by pengo at 12:00 AM