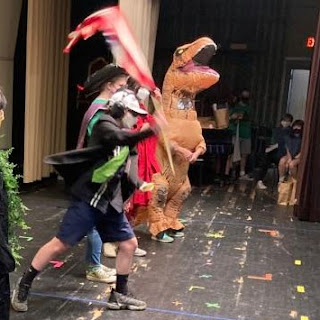 It is true, with the improv club on our penultimate day, we could spend the entire day rehearsing and preparing for our performance.

To think. We weren’t even sure if we could do this. Would anyone sign up? Would they agree to masks? And how would that go? I’ll tell you, it went fine. Only the photos will remind me that we were even wearing them. And no one got sick, not at this camp.

Family and friends of the campers arrived in time for a 2:30 PM performance. The Jesters & Fools (9-11 group) presented an original play about oracles before our teams presented their short plays and Shakespeare scenes, before the entire camp came together for our final song and dance number. It was a one-hour show! Created in eight days!

The short plays, by the way, were presented in a manner inspired by the Neo-Futurists. We called it “Ten Short Plays in Twenty Minutes” with the caveat that there were neither ten plays nor were we performing them in twenty minutes, though when all was done I believe we did execute all eleven plays in twenty minutes or less.

On the drive in this morning, I was already thinking about next year, when hopefully I will have a better opportunity to organize the improvisation workshops. The first week is for a close study of the mechanics or techniques, the second concentrating on a singular character for use in a (short) long form improv.

Now, if you will excuse me. I am going on vacation.