The Ocean Breathes Salty (In Performance)

Writing has always been my superpower. First, I harnessed it as a tool against my enemies. I thought that was okay. I was wrong. When I learned how to use it as a force for good, things came into focus. I could tap into my mind, my heart and my soul, and I started to understand what I was meant to write about.

What is writing as a tool for good? Having an agenda, knowing what your agenda is, and that it is true. That it harms none. You put people you love onstage. You learn something.

Anything you might have to say to someone you love which might be harmful? Say those things in person. Or decide that it is not important. Know that about yourself, at least.

This was the first weekend for the 2022 NEOMFA Playwrights Festival, which featured two ten-minute plays – mine (The Ocean Breathes Salty) and one by Eric Mansfield – and a one-hour work by Gabby DiDonato.

Mine was the weird one. Mine is always the weird one. The others were clean in their narrative, mine was abstract. My wife approved but even she suggested it may be a bit underwritten. I was pleased with the results.
It was an experiment, I would normally have chosen to do one, single scene, instead opting for five short scenes which allowed characters to bounce off of each other in twos and threes. Perhaps more suitable for a full-length, but who knows. One of my professors commented that they liked the short scenes, these vignettes. I like them, too.
I saw the performances on Friday and Saturday night. There was a post-show talkback on Friday which, for my play focused entirely on the bunny. There’s a bunny in the play. What was the significance of the bunny? That was pretty much the entire discussion. There were also four human actors in the play who played characters with emotions and lives and things, but everyone was confused about the presence of the bunny.

I think my brother put it best when he said, “Sometimes a rabbit is just a rabbit.”
Thing is, there were several audience members who spoke to me, during intermission, after the show. They wanted to know what happened in the play, because they were unsure. I asked them what they thought happened, and each of them, somewhat hesitantly, told me what they thought had happened. And each of them were absolutely correct. They did understand the play. It just wasn't made obvious.
This week we're reading Sheila Callaghan, and I am digging the way she plays with reality. I need to decide what story I want to tell this semester, and this experience with The Ocean Breathes Salty has inspired me to move further in this direction. Playing with reality might be my new superpower.
Many thanks to KR Jones, Adam Harry, Emmett Podgorski, Clare Scott and Hannah Woodside, who did beautiful work on my short play!
The 2022 NEOMFA Playwrights Festival continues next weekend at convergence-continuum with plays by Laura Barbieri and Justin Lazor. 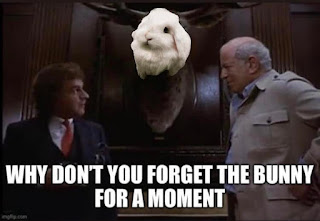