On the Dark Side of Twilight: Elyria Catholic High School 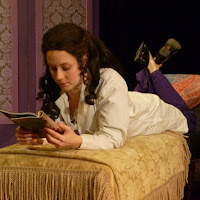 The high school performances have truly rocked this year! We visited Elyria Catholic High School today, and a higher number than usual were in attendance in the gymnasitorium. The floor was filled and there were a lot of students in the bleachers.

Some guys believed this play was only about Twilight and were not necessarily looking forward to it. We do not give high school students programs before the show, out of concern that they may read them during the performances, or leave them lying around if they don't really want them.

Most students are compelled to attend assemblies, don't you know, and may not even like plays. But the program does explain what the show is, which is helpful if you are seeing it for the first time. So whoever is moderating the show that day (today: Lisa!) has been providing a brief explanation of the concept before curtain. 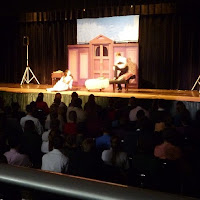 And wow. The EC kids liked The Giaour! I am not suggesting previous schools didn't, but usually they have had to just kind of take it in, and don't laugh or respond vocally until The Count. But they were with us from the very beginning. It was sweet.

Then, of course ... there's Dusten's "Lower Power." Andrew had directed that delivery to be ... potentially ... I mean, let's just say ... there was the potential for a double-meaning. Today was the first time I think anyone got that. Unfortunately, the very next line is:

Email ThisBlogThis!Share to TwitterShare to FacebookShare to Pinterest
Labels: Elyria Catholic High School, Great Lakes Theater, On the Dark Side of Twilight