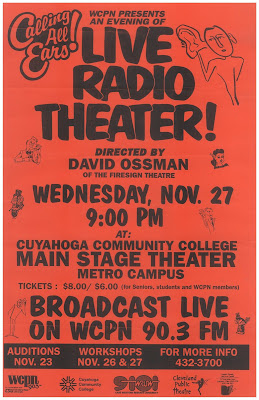 Fall quarter my sophomore year at Ohio University, our acting professor reached out to my buddies and I about a special project. A class in the RTV building was studying radio drama and they had a special guest, David Ossman.

Most recently Ossman was a producer for various programs on NPR, and PBS voice-over work. We knew him, however, as a member of The Firesign Theatre, that satirical radio comedy troupe of the late 60s-early 70s. We were very excited to get to work with him, and even went to the local record store to pick up copies of their work to bone up before meeting him.

Seriously. We went to the local record store and bought vinyl copies of Don’t Crush That Dwarf Hand Me The Pliers, Everything You Know Is Wrong, I Think We’re All Bozos On This Bus, Wait For The Electrician (Or Someone Like Him) and How Can You Be In Two Places At Once When You’re Not Anywhere At All. They were all right there, waiting for us, in the store. Athens!

I was a little bummed out because at the moment my voice was almost destroyed. That quarter part of theater practicum was clearing out the attic space in Kantner Hall decades worth of props and smaller set pieces which had been stored there and largely forgotten about. The entire room had a thick layer of dust and I was surprised to learn the deep gray cement floor was, when vacuumed, actually a pristine white.

The end result of having inhaled so much dust, however, was that I could barely speak. However, one of the scripts we worked on in the radio production class featured an elderly gentleman, and I was able to push through a rather convincing impression of the character of the decrepit manservant Catherwood from The Future Adventures of Nick Danger, Third Eye, originally performed by (yes, indeed) David Ossman.

That was the first time I met David Ossman. The second was when he produced Calling All Ears for WCPN 90.3, which broadcast the night before Thanksgiving, November 27, 1991. Produced in collaboration with Cleveland Public Theatre, the event was held at the Metro Campus of Cuyahoga Community College.

An evening of “live radio theater” the show was to include three winners of a writing competition, though apparently one of them was for some forgotten reason unusable (inappropriate? too complicated?) and so the third piece was one from Ossman’s bag of tricks, Max Morgan: Crime Cabbie. As he explained it, by the 1950s radio drama was on the wane, with every conceivable detective show angle played out, and this was a satire of one of those.

It was thrilling and unnerving was when I discovered I was cast as the bartender Fergus, opposite Ossman himself as Max Morgan! Unfortunately, my twenty-three year-old self worked a little too hard to impress, and as a result I spent much of the performance trying to out-dick the dick, playing a smarmy variation on Nick Danger instead of the role I had been cast as, the easily-impressed sounding board for the actual hero of the story.

Most memorable for me was the large acting company, where I met for the first numerous players who would have a profound effect on my life. Freshly out of school and only recently settled into a daily Cleveland existence, this process introduced me to a large Cleveland theater community -- and we were all so young then, too.


Brian Pedaci, Peggy Sullivan, David Thonnings, Jenny Litt, Lee T. Wilson, Shruti Amin; there were all folks I would play with in the following years. I also made the acquaintance of Dave Caban from WRUW, Karen Schaefer from WCPN, and broadcast project director Jordan Davis.

My favorite piece of the evening was penned by the late Cleveland playwright Aubrey Wertheim. Originally titled Make Way for Dyke-lings, the more radio-friendly Along Party Lines is totally early 90s. Imagine if you will, a pair of suburban teenage girls waiting in the food court at Tower City to meet and see a movie with a pair of strange guys one of them met over a “party line.”

A "party line." Look that up, Millennials. I’ll wait.

The whole thing is crammed with Foley and recorded effects, a vast company of colorful characters, and a surprisingly progressive take on young adult relationships. It also includes my favorite tagline for Tremont, one which I find amusing even today.


The early 90s were a difficult time for Cleveland, the city center continue to be hollowed out, Tower City and the Galleria were already going into decline, the entire nation was in economic doldrums, there was no clear end to our woes. But it was a joyful moment, as a young artist, to meet and collaborate with so many exciting people.

Even so, the attendance that evening was all right, perhaps a hundred people were in the audience for this live event, enough to generate an audible audience response but not a very strong one. Getting people to come downtown, to do absolutely anything, was a difficult challenge at that time.

This past weekend I returned, with my family, to that same venue, the auditorium at the Tri-C Metro Campus, to see my daughter perform her first concert with the Contemporary Youth Orchestra, a unique and exceptionally talented ensemble under the direction of Liza Grossman. The place was packed, the room buzzing with excitement. It got me all excited for the holidays.

Get out into the world this season. Enjoy Cleveland. And Happy Thanksgiving! 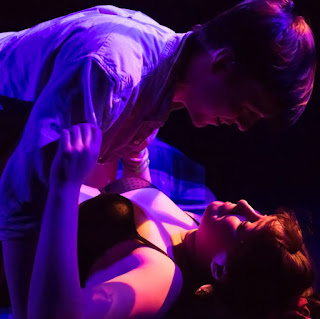