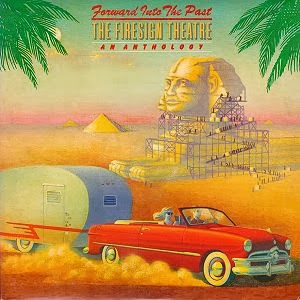 It's the Ministry of Funny Walks. Do you see?

Whatever, what do you know from funny.

So, while Monty Python was skewering British society, The Firesign Theatre was smoking a lot of pot. Oh, and skewering American society.

Formed in the late 1960s, the Firesign Theatre (Phil Austin, Peter Bergman, David Ossman and Philip Proctor) created surrealist tableaux of funny, often taking both sides of one LP to tell an extended, dream-like story. When I was a kid, I did not know the extent of their narratives, because the only album we had in the house was a compilation record, Forward Into The Past (released in 1976) which included selections from their previous nine albums, plus difficult to locate comedy singles.

In 1972 they released Dear Friends, a collection of their live radio broadcasts on KPFK in San Francisco. Whereas their produced work is tightly scripted, this program allowed for a certain amount of spontaneity, which on two occasions, got them fired.


Just in time for the holidays:
"Toad Away"
Recorded December 9, 1970 on KPFK
Fan video by me. 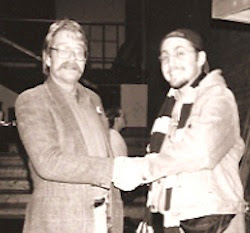 David Ossman and ... what the hell am I wearing?

Participating in this program was thrilling; Ossman cast me to play Fergus the bartender against his Maxwell Morgan, Crime Cabby. Unfortunately, it is a little embarrassing to listen to now, as I am trying too hard to match him, tough guy to tough guy, when my job was to be the squirrely sounding-board character. I mean, I was the bartender.

It's like Tom Hanks told me, you don't want to meet your heroes.

Before broadcast, Ossman warms-up the audience with the Firesign classic, "Bozo's Big Bang."

Having graduated from college that spring, this was my first big professional-grade theatrical project in Cleveland. The best thing to come out of Calling All Ears, however, were all the great connections I made with fellow travelers like David Caban, Brian Pedaci, Peggy Sullivan, David Thonnings, and Lee T. Wilson.
Posted by pengo at 10:45 AM

Brian Pedaci There is currently a NYC-based theater artist named Cheryl Bear who is tearing through all of my short plays on New Play Excha...