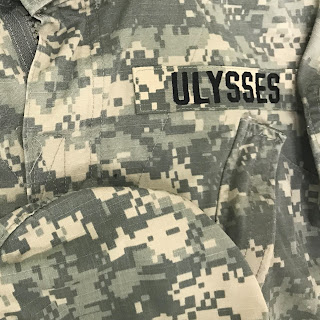 The Cleveland Shakespeare Festival has to perform in a wide variety of spaces, from plain, grass fields to brick plazas, with audiences seated all on the same level as the company, or looking up at a stage. There are two large tents, situated stage left and right, that act as a backstage area for the performers.

It is because of these variances and limitations that I prefer to have absolutely no set. I will be honest, whenever I have seen CSF use a set, I have found it an unpleasing distraction from whatever the unique backdrop of wherever the show is being presented, whether that be a college building, a bandshell or chain link fence.

For Henry VIII we used one piece of furniture; a blue, plastic waiting room chair, for exactly one scene.

Timon of Athens did have a marvelous set piece, a large refreshment tray, covered with snacks and drinks and festooned with a large fraternity logo. It remained onstage for half the show, when Timon was in town and throwing parties, and wheeled off for the second half when he had abandoned civilization for the woods.

Instead, I always want to costumes to be the set. The costumes are vitally important to instantly communicate character, and to transport the audience to a specific time or place.

The costume designer for Troilus & Cressida, Jenniver Sparano, has heard this before. She joked with that “no ever ever says they don’t want costumes, that they want the set to tell the whole story.” So be it! When I heard Jenniver was going to be working on this production, I was so delighted. I am happy to have been dressed by her in the past, she’s an outstanding designer with great attention to detail.

Of course, I have been very happy with each of the costume designers I have worked with through CSF. I appreciate how challenging it can be to create or procure costumes for a large company on a modest budget. For Henry VIII I asked designer Heather Brown for modern suits for men and women that communicated wealth and power, and that is exactly when she provided.

Meg Parish created a perfect year 1970 college campus look for the company of Timon of Athens, which was complimented by a team of actors willing to let their hair grow out for part of the summer.

Troilus & Cressida, a tale of the Trojan War, has been updated to take place ten years ago, during the waning months of a conflict which will be visually familiar to our audience. Jenniver has gone so far as to create stitched name tags for each of the Greek officers. The company looks outstanding, and they have been inspired by their costumes.