The common wisdom is that in order to present the appearance of fairness and balance you must provide “both sides” of the story.

The Guardian (UK) recently published the article Cleveland's dividing lines over race issues come to light under Trump by Chris McGreal (3/3/2017) an interesting, troubling profile of race relations in our city. The story includes interviews with two men - one white, one black. “Both sides.”

The problem in this article, as is the case everywhere, is that the considered, carefully stated opinions of Police Detective Lynn Hampton, who is black, are drowned out by the bellicose, defensive, defiant and cognitively dissonant opinions of retired steel executive Brian King, who is white.

With the election of Donald Trump, Detective Hampton worries about an escalation of tension between the Cleveland police and the African-American community. “What kind of society does (Trump) want to create? You can’t continue to back people into a corner without anybody eventually getting tired and striking out. That’s the very thing that I’m trying to avoid,” Hampton says.

A Trump supporter, King badmouths all other politicians for pandering. “They’re all snakes and getting rich off us,” he says. King hopes that “Trump puts sane people in charge of this.” But he also admits that Trump is “an asshole,” but that that is why he supports him. “He’s a shyster. He’s a crook. But I want him to be a crook for us.”

Asked for his opinion, King talks not only out of both sides of his mouth, but out of every orifice he has.

The white man’s word so totally overwhelms that of the person of color. We saw this on full display at last week’s Oscars, when the embarrassment of white producers, the dithering apology of a white Hollywood legend and the several days of analysis and hand-wringing over dingbat white accountants entirely eclipsed the historic fact that this year the Best Picture was in fact awarded to Moonlight, a film starring, directed and written by people of color.

Last weekend, my wife and I went to see Objectively/Reasonable at Playwright’s Local, a play created by several local playwrights based on numerous interviews on the subject of recent police violence in Cleveland. Watching this performance, we did not hear two sides of the Tamir Rice tragedy and the Brelo case -- we heard the story from dozens of sides. From citizens, police officers, community organizers, city councilmen, journalists and family members.

The fact that each point of view we heard from, every unique opinion, was from the mind and mouth of a person of color does not make this performance piece “unbalanced.” The absence of white voices - the “other side” - meant that we could actually hear it, without the noise of that dominant party, always obfuscating, misrepresenting, and whitesplaining.

I am white. I am not the "other side." And I do not need the hear other white people explain anything to me, at all. Especially white men.

Objectively/Reasonable is a breathtaking performance, too, you should see it. The performers are uniformly excellent, the stories deeply affecting, director Terrence Spivey truly outdoes himself with this event. Our city needs to listen to these voices, without the sudden urge to respond. Listen first, and think without prejudice.

On a similar note, the folks at Loganberry Books have staged their own performance-art event in honor of Women’s History Month.

As reported in Cleveland Scene, Loganberry Books Shelves Men's Books Backwards as a 'Metaphor of Silencing the Male Voice' by Laura Morrison (3/3/2017) owner Harriett Logan and her staff reshelved every book written by a man so that their spines face the back of the shelves.

What do you see? Perhaps how few books that have ever been published have been written by women? You can also see more clearly all the books which are written by women. The picture of the shelves is quite striking, when the books are are presented that way.

Unfortunately for Harriett (who is a good friend) when being interviewed, she said that the display is a “metaphor of silencing the male voice.” And as you see, that became the headline. 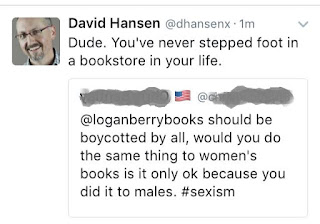 Well. You can imagine how many men who happened upon this article on the internet took to the idea of being “silenced.” The social media blowback was ugly. They have called for a boycott, probably the same people who called for a boycott of the musical Hamilton.

The very idea, the suggestion of forcing a white man to be silent, to stop talking, to wit; to shut the fuck up ... and not even in reality! As a metaphor, as a display in a second-hand bookstore. Why it’s unconscionable! It’s unbelievable! It’s unfair, it’s discriminatory, it’s sexist! Sexist against men!

Honestly, white man. For the first time in your life, sit down. Take a deep breath.

And shut the fuck up.

Objectively/Reasonable at Playwrights' Local continues at the Creative Space at Waterloo through March 11, 2017.

Loganberry Books is located at 13015 Larchmere Blvd. in Cleveland.
Posted by pengo at 3:51 PM