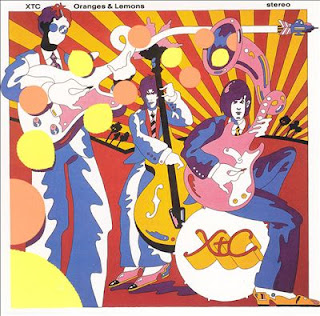 Part two in an ongoing examination of the best year in musical history.

Oranges & Lemons - XTC Some guy writing for Rolling Stone suggested that if Skylarking was XTC's Sergeant Pepper's, the Oranges and Lemons certainly follows as their White Album. Skylarking may have been the epitome of XTC's work, completing the transition from the somewhat clumsy after-punks of White Music (which features some great songs in which frontman Andy Partridge sounds unhappily uncomfortable) to the Beatles tribute band they had always desired to be.

The friends who had originally turned me on to XTC weren't thrilled with Oranges & Lemons, and it does have some unlistenable tracks, notably the heavy-handed President Kill Again and the not very clever Pink Thing which is, I shit you not, a poppy love song to a penis.

However, these are two false notes in an otherwise brilliant collection of tunes which landed just as spring was breaking for this young man about to turn twenty. And the thing actually had singles! Singles which charted, somewhat!

Speaking of spring break, I spent mine driving solo to Panama Beach and back, smoking cigarettes, chugging Diet Pepsi, driving well over the speed limit through the Deep South, and listening to this cassette over and over (which is what you did with cassettes) enjoying the metaphysically sexy punch of The Garden of Earthly Delights and The Mayor of Simpleton, the angry young manly introspection and doubt of One of the Millions and Miniature Sun, or the outright screamingly arrogant and cynical rage of Scarecrow People and Across This Antheap. 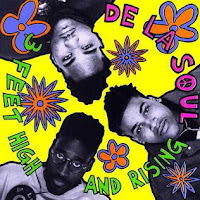 3 Feet High and Rising - De La Soul For white kids from the suburbs, we got into hip-hop pretty early. We had memorized Rapper's Delight before Blondie's Rapture had even been released, and not the other way around. Ditto, La Di Da Di. By the time the Beastie Boys emerged, we were keen enough to appreciate that License To Ill was meant as parody.

Rap had already been through many phases by the end of its first decade, from block party to the message to the frat party and on through my introduction to the biography of Malcolm X via the works of Chuck D, rap music had for the most part been an education, a look into a world in which I was entirely unschooled.

De La Soul was the, what, fifth wave of hip-hop? Sixth? Nerdy Tribal Retro Academic. Sampling as trippy modern art, lifting not merely funk and soul but 60s psychedelia and children's records. I was yet too callow to "get" it, but every track was an education. Every track still is.

Which reminds me, I need to go back and watch School Daze.

The gateway drug to Native Tongues, thank you Tribe Called Quest, Jungle Brothers, Q-Tip will never age. Phife Dawg, rest in peace. Also, lyrics. Also, too, comedy. I wish my cousin Nag was here, he knows these things, no, I'm sorry I don't.

Pretty Hate Machine - Nine Inch Nails No, I am not that cool. I did not purchase Trent Reznor's first album when it was released in fall of 1989. I cannot claim to have seen him perform at the Phantasy in Cleveland, I was at school. But this is another example of how the last year of that decade was the greatest in music history.


My introduction was in 1991 on KROQ in Los Angeles and picked up a copy at Tower Records. This first album (ticky ticky ticky thump) came at just the right moment, clearly articulating a sense of self-loathing and unhappiness with something edgy enough to feel dirty but in reality much like disco.

You should hear the Purest Feeling demos. Some of it sounds like Madonna.