Love’s Labour’s Lost (1598?) was a very topical play, making reference to many timely political figures and historical events, and so, like the comedy stylings of Vaughn Meader, dropped into obscurity almost immediately after it was written.

At its core the story is quite simple. Boys decide for a certain period of time to swear to avoid girls. Girls show up. Hijinks ensue. There are subplots involving a Spanish nobleman (who for some reason is written to speak in a funny accent, unlike the rest of the men who are also from a region in Spain) and academics who speak in impenetrable pedantisms.

Back in 2000 the Cleveland Shakespeare Festival produced a 90 minute version directed by Eric Schmiedl which entirely eliminated the subplots to focus on the (four) men and (four) women. People affectionately called it the “Gap” Love’s Labour’s Lost, because they all wore khakis. Scene gave it an award for “Best Local Production With Homegrown Talent,” because in those days, apparently that was a necessary distinction.

Surprisingly, for all the talk about how infrequently this work is produced, I have had a chance to see it several times. When our school toured London and Stratford in late 1990, we saw Ralph Fiennes as Berowne and Alex Kingston as Jaquenetta, several years before either of them were known by American audiences.

However, I do not recall a moment of that production. Even with all of the topical references removed, the language is very dense, even for Shakespeare. Though you may follow the plot, it is not a sure thing that you want to. The words ... the words are ... there are so many words.

Tyne Rafaeli’s production, now showing at Great Lakes Theater, is by far the clearest and most hilarious version I’ve ever seen. And they do talk a lot. They will also horrify bibliophiles with their unprecedented abuse of bound materials.

What excited me most about this version was how honestly and firmly the director and performers handle the matter of gender. Comedies about boys versus girls (in the world series of love) can so easily rely entirely on stereotypical gags about female body types and literal kicks to the crotch.

Rafaeli treats us to a story about young men and women of privilege which, while absurd, cleaved neatly to reality, to wit; I cared about the characters. I liked being in the room with them. The playful, joyful, exuberant chaos of the second act was earned and delightful and its abrupt ending was very touching.

In this production Laura Welsh Berg plays Rosaline, attendant to the Princess of France and romantic foil to Berowne, with a fierce worldliness, befitting this storied character. Many have speculated that the dark-eyed Rosaline (Berowne says she has “two pitchballs stuck in her head for eyes”) was inspired by the same “dark lady” who consternates Shakespeare so dearly in his sonnets.

My mistress' eyes are nothing like the sun ? Well, yeah. They're pitchballs.

It was due to this apocryphal connection that we chose to produce George Bernard Shaw's The Dark Lady of the Sonnets as the outreach tour in 2006, when GLT last produced Love’s Labour’s Lost.


The expense of spirit in a waste of shame is lust in action ... 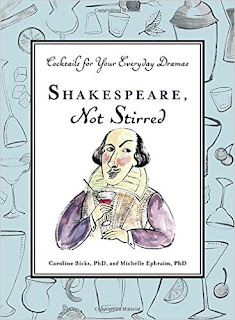 And speaking of alcohol (wait for it) this weekend I am looking forward to enjoying a refreshing Young Man-Hattan, one of those concoctions to be found in Shakespeare, Not Stirred: Cocktails For Your Everyday Dramas, a handy and very funny reference guide of delightful drink and hors-d'oeuvre recipes penned by Caroline Bicks and Michelle Ephraim.

The Young Man-Hattan is a variation on the classic drink, only a little more bitter -- much like the Bard himself, writing some of the least warm and fuzzy love poems ever to an unnamed “young man” and their relations with the aforementioned dark lady.

This Saturday night I have the honor and privilege to be moderator for a light and amusing discussion with Dr. Bicks and Dr. Ephraim before the evening performance of Love’s Labour’s Lost at the Hanna Theatre. Join us!