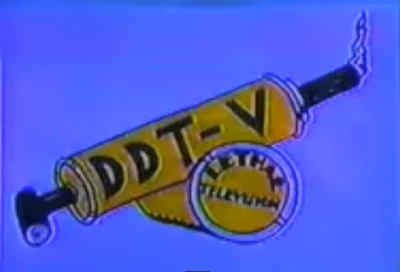 From 1983 and 1986 a number of Bay High School students (and a few graduates who never really got away) produced a half-hour comedy program for our public access station. At the time we thought of our work as mediocre, but looking back is it surprising how much we were able to accomplish with so little.

Most of the bits trod well-covered ground, obviously emulating Saturday Night Live, SCTV and Not Necessarily The News, featuring fake news segments, advertisements and public service announcements. But at least the writing was original and we were able to exploit our suburban surroundings to our best advantage.


We produced two "Christmas" episodes in 1984 and 1985. We had been working on one in 1983, but someone in production rewired the editing facility and got us banned from the studio for about a year.

In the year 1985 alone the company made six shows, but after producing two more the following spring and summer, a large number of cast members graduated from high school and that was apparently that.
UPDATE: DDT-V (Revisited)
Posted by pengo at 8:55 PM