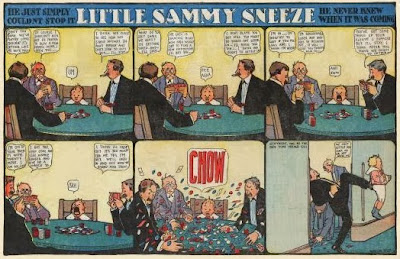 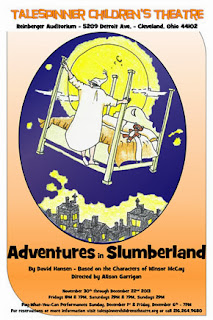 Winsor McCay's first successful comic strip for the New York Herald was Little Sammy Sneeze. Like Slumberland's final image of Nemo waking up, the gag here was basically the same. Sammy sneezes, in doing so ruins something, and then he is beaten, kicked or otherwise driven from wherever he has caused his destruction.

Contrary to the subhead -- "he never knew when it was coming" -- he knew when it was coming for a good long while, and so does the reader, it's everyone else who is oblivious for four dialogue-stuffed panels. In one classic strip Sammy sits all alone, and when he sneezes he breaks the panel lines which crash around him. Meta McCay!

There is reference to Little Sammy in Adventures In Slumberland, which opens at Talespinner Children's Theatre this Saturday.