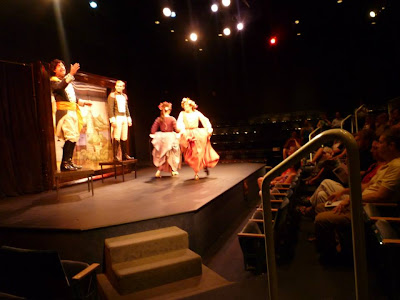 Last night we presented Double Heart at Talespinner Children's Theatre, our final performance before heading to FringeNYC. The evening was a rousing success, and quite a celebration.

It has been several months since we last had the opportunity to share this show with an audience, and while reaction had always been positive, it truly felt like this evening's crowd (who included, after all, some dear friends family and close supporters) was in tune with the production on all levels, reveling in the bawdy humor, delighting in the dance and swordplay, and moved by the high emotions. 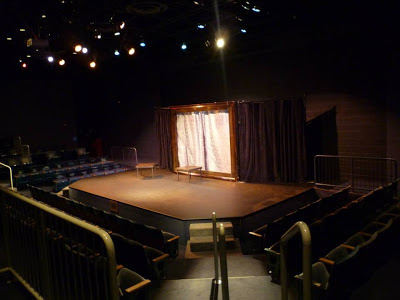 This set will look very nice at the Connelly.

One of the great challenges for the folks at FringeNYC is to schedule roughly 10 shows in each space (200 shows in 20 spaces) and part of that means being able to tell them exactly how long the show is, with little variation more or less. We need to set up and tear down our show in no more than 15 minutes to make room for the next production.

We told them it runs 60 minutes. Tonight's performance, with lots of audience reaction, ran about 58 minutes! Good call. 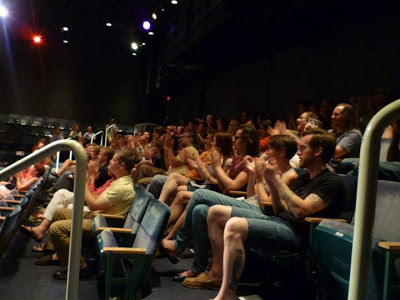 During curtain call we recognized a few of those without whom this entire production would not be possible. Tonight's show couldn't have happened without the great assistance of the entire crew at Talespinner. Their spring production of The Emperor's Ears closed yesterday, and they cleaned up the space and painted stage so we could be there tonight.

Next we thanked Great Lakes Theater, for commissioning the work, producing it, and providing costumes, the set and so much support in our endeavor to give the show new life in New York.
Finally we thanked our Kickstarter backers and others who have provided much-needed financial support and asked them to stand and be recognized. It must have been at least half of the audience who stood, and we thank them and those who could not be present so much for helping us make it this far.

Things I really enjoyed about Double Heart after seeing it tonight:
Rob summed up, "NYC is in for a treat."

Thank you, Rob. Last night, that audience was the treat.
Posted by pengo at 10:35 AM