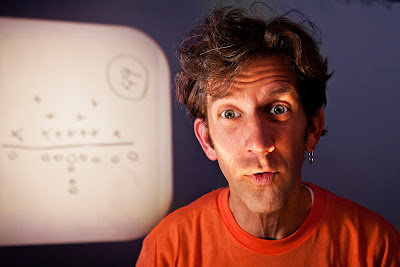 Eric Schmiedl got me my first professional theater-related job. It wasn't really his doing, he was slated to remain with the education department of Karamu Theatre for a second year, but decided in stead to go off and get married or get another graduate degree or something and there was need for a tall, thin, guitar-playing white guy for their touring production My World If ... Someone else in the company knew my name, I got the call, and could stop waiting tables at Friday's.

I also needed to learn to play the guitar in 24 hours. Three chords. Who can't play three chords? 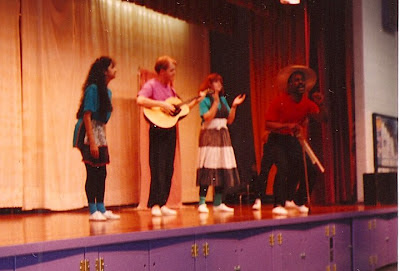 Eric and I first worked together when he directed Sarah Morton's Night Bloomers in 2006. That's an interesting story unto itself, for another time, perhaps. He also directed me in Eric Coble's The Velocity of Autumn at Beck Center last spring. But most of our time together is at the Playwrights' Unit, where I am constantly delighted by the pages he brings in from whatever he is currently working on.

Last summer, the boy and I saw Singin' On the Ohio, Schmiedl's two-hander about the Ohio & Erie Canal presented at the Big Red Barn Theatre. He wrote and was one of the performers in it, and spend the entire summer -- two performances every Saturday and Sunday -- spinning this historical yarn about an Irish-born canal boat captain and the once-enslaved young woman who came on board as his assistant. After the show I asked if these were real, historical people. He said, no, he'd made up the whole thing. But the Ohio & Erie Canal is real, the setting, the history is real. I wanted to believe. 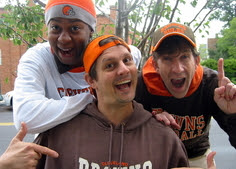 The Kardiac Kid opened this weekend at CPT, ostensibly a story of the 1980 Cleveland Browns Season, but fortunately it's not. I missed his last homage to the Browns, the collaboratively conceived Browns Rules because I was under the impression that it was supposed to be a big, funny, loud pageant of Browns Fever, and if I did not care to watch football, I wouldn't really enjoy it. That, and it had Nick Koesters in it, and I hate him.

Last night I took the kids and some friends to check out this new, solo performance. Watching Eric perform his own work is something not to be missed. He's just so warm, engaging, so very, very real. More human than human. In this ninety-minute show (there is an intermission) he tells five stories of Browns fans during the entirety of that non-championship season, a reminder that it's not the game, it's how that fits into the rest of your life that's important.

As the sun will cross the sky, the Browns lost today. Score was a laughable 41-27. No idea who they played, don't imagine it makes any difference, could have been anybody. The Cleveland Browns are just awful, and I have never understood why my fellow citizens put themselves through this misery year after year for what I find to be a painfully slow, boring game. Eric didn't change my opinion of football or the Browns one bit last night. He just made me love people more. 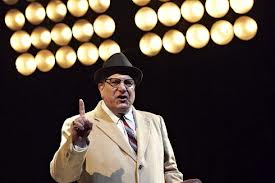 Lombardi by Eric Simonson closed at Cleveland Play House this weekend, a play about Green Bay Packers coach Vince Lombardi, who -- if you can believe his pain -- went three whole years without a championship. The story tales place in 1965, as Lombardi somehow (it's not clear) guides his team back to preeminence.

It went without mention that the city they had to beat to win 1965 championship was Cleveland.  The 1964 Cleveland Browns was the last championship team Cleveland will ever have.

"The Kardiac Kid" plays through October 20.
Posted by pengo at 8:32 PM