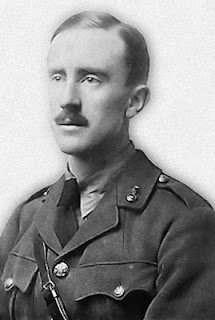 Some people like raising babies. My own wife has expressed that she misses the baby-era in our life. And I do, too, but not very much. Because we are in the Daddy Zone now. The children are old enough to "get things" and to make puns and have thoughtful conversations about absolutely everything. And then there are the books.

They are good readers, which makes me happy. And we read to them, every night. Every other book is something comforting and fantastic like Paddington or Mouse and the Motorcycle. But we are also moving into realms of fantasy and danger. During summer trips this year I read everyone the first two Harry Potter books. This fall we tackled The Hobbit (1937). At first they did not wish me to begin. Then they never wanted me to stop.

This was my second time reading The Hobbit. The first was in the late 1970s, I read it when I was a little older than the girl is now. The Rankin Bass animated TV version debuted Thanksgiving weekend during that magical year of 1977. Having only read it once, my impression of the book is much more informed by the cartoon, for better or worse. Orson Bean as Bilbo was very nice, and his voice still rings in my head every time I utter the phrase, "Bless my soul!"

Other voices are better and worse. John Huston as Gandalf? Yes, thank you. Hans Conreid as Thorin? Sorry, his work on Rocky and Bullwinkle made that a hard sell. And Smaug sounded like a thug on autotune, I am seriously looking forward to Benedict Cumberbatch tackling the role. The sounds of this one-hour Rankin Bass version is all the more impressed into my head because my parents got me the LP the same year.

But checking out clips on YouTube, it is remarkably good for a Rankin Bass endeavor, rich in detail, pretty faithful to the source material and with resonant music that stirred something deep inside when I heard it again after so many years.


Adam Gopnik wrote what was ostensibly supposed to be a review in The New Yorker for the final installment in the Eragon series, but since that did not appeal to him he instead wrote about Tolkien and how The Hobbit, while itself yet another chapter in an ancient tradition of British mythology, set the template for virtually every fantasy adventure tale written since.

We have dwarves, trolls, goblins, elves and men (men being the least interesting of them all) and then some kind of small creature who is a stand-in for all of the best qualities of simple, agrarian people. It is this last which marked Tolkien's tale as new and different, as our hopes and dreams lie not with the great king or warrior, but with the meekest of the team. (See: Star Wars, The Dark Crystal, Twilight ... and so on and on.)

Much has been written about The Lord of the Rings being inspired by the figure of Hitler and World War Two, which Tolkien flatly denied. And I believe him. Sauron is absolute evil, and as much as you can say about Hitler, he did not invent the idea of absolute evil.

However, reading The Hobbit, the author's own experience in the trench of World War One are undeniable. That is not to say that this book is a metaphor for that conflict. However, Bilbo's sense of helplessness in the run-up to The Battle of Five Armies is palpable, and earnest, and heartbreaking.

His comrades, the dwarves, for reasons beyond greed, insist in maintaining the entirety of the wealth under Lonely Mountain, in spite of the assistance granted them from the Men of Esgaroth. Arriving in arms, accompanied by the wood-elves who had imprisoned the dwarves, Bard makes a tactical error which could have been avoided.

One element I had forgotten about entirely (it wasn't in the TV show, and remember, I read this last when I was nine) is the Arkenstone, which our hero steals, knowing the worth placed upon it by the leader of this small team, Thorin Oakenshield. He betrays the dwarves, turning the stone over to the other army in the hope that it can be used to bring about a peaceful conclusion.

Bilbo Baggins betrays his friend in the name of peace. And as it was in 1914, he fails. The author knows well enough where all this is headed. As it turns out, the goblin army arrives and men, dwarves and elves team together to fight their collective enemy. Tolkien's description of The Battle of Five Armies is not glorious, it is not majestic. It is horrible, devastating, chaotic, and ends fortunately for our heroes only because it is joined by a sixth army (the Americans -- I mean the Eagles, get it?) which entirely routs the goblins.

My play script "The Mysterious Affair at Styles" adapted from the novel by Agatha Christie is available at Playscripts, Inc.
Posted by pengo at 12:45 PM

Email ThisBlogThis!Share to TwitterShare to FacebookShare to Pinterest
Labels: J.R.R. Tolkien, The Hobbit, World War One