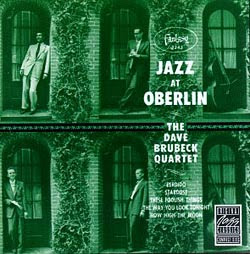 "Jazz at Oberlin" was an extremely popular record for Brubeck’s quartet and a smashing success in the Oberlin community. The concert and album presented an audience largely uneducated in jazz with some of the genres finest players, all performing at the top of their game. And while a successful jazz concert at Oberlin these days is a regular occurrence, such was not the case in 1953, when the concert halls at Oberlin were filled with Bach, Beethoven, Brahms — and occasionally Bartök — but not with Basie or Baker.

On March 2, 1953 The Dave Brubeck Quartet played Oberlin. And my father was there. The quartet was Dave (never David) Brubeck on piano, Paul Desmond on alto saxophone, Ron Crotty on the bass and Lloyd Davis on drums.


The concert had all the ingredients of a major disaster. Aside from Oberlin’s indifference toward jazz, Brubeck and his outstanding saxophonist, Paul Desmond, had just had an argument, bass player Ron Crotty had just been given his notice, and drummer Lloyd Davis was ill with the flu and had a 103-degree fever.

My father was seventeen, in his senior year at Lakewood High School. The night in question was a Monday night, otherwise he is sure he could have gotten someone to go with him. But as it was a school night he could not, so he drove to the Oberlin Conservatory of Music on his own, and experienced was he still calls “one of the greatest musical experiences I ever had.”

Tracks included on the original LP include These Foolish Things (Reminds Me Of You), Perdido, Stardust, The Way You Look Tonight and How High The Moon.


Back in 1953 any form of on-location recording was by no means a commonplace event. So much of the technology that is taken for granted today had not even been imagined: to record during ‘live’ performance meant setting up a portable machine for one-track (monaural) taping, using relatively insensitive microphones and no monitoring systems, with little or no physical or acoustic control over the surroundings.

- Orrin Keepnews in the liner notes for a 1986 CD release

My father was turned onto jazz by a guy whose name he cannot remember who worked at Lamp’s Melody Lane on Detroit, just around the corner from his home on Mars. This fellow (in his 20s? 30s? Dad’s not sure) “inculcated” my father with jazz -- and lots of other music, too. In fact, when I was speaking with him about it tonight, he was remembering how the piece he heard the Cleveland Orchestra play this weekend, Bartök’s Music for Strings, Percussion, and Celesta, was first played for him by this guy at Melody Lane.

When my father went to college he found the opportunity to go with friends to other jazz clubs, though most were pretty strict about not letting people under 21 in. He found most of them to be integrated -- mostly black clientele -- but from his perspective no one really cared.

My senior year in high school I saw Maynard Ferguson at Rocky River High School. Not the same thing.