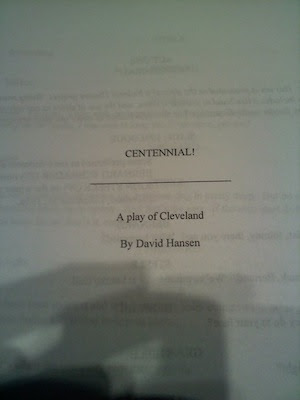 Shared the first draft of Centennial with the Playwrights' Unit this evening. This is a play which, after conducting non-stop research for four weeks, both here and in New York, I did not know how to begin. And there it is. Yay oh me.

I was delighted to share all of my really young GLTF actor-teacher friends with the Unit, as they read all the parts. In my wildest fantasies, it really is playable with eight actors. We will see about that. I commend Debbie, Bobby and Kristy for jumping in with no rehearsal what so ever -- can I send a special shout-out to Debbie for delightfully playing the eterenally upbeat Voice of the Living Newspaper! Also on hand were (in alphabetical order) Annie, Brian, Carrie, Nathan, Steven and Tim. Especially Annie, who was given the responsibility to sing a capella before the play had even really started.

So, where am I? In a good, good place. Really good. Is there work to be done, to be sure. But I didn’t even know where the hell I was, and that has changed. I know where I am, and hopefully where I am going.

DM made a very simply, and helpful point. The first third is a "valentine" to Cleveland, the second third dense with politics (which left her a bit sleepy) and the final third all about Bernard. This is good to know. TKT does not agree, exactly, but that does not mean it is not a helpful observation.

There were difficulties in following certain physical gags, especially anything involving the appearance of both Sam and Bernard in the same scene. I got that, I can clear that up.

TKT also pointed up how the relationship between Bernard and Johnny is implied submerged, glancing. Where the emotional weight of this relationship, what is at stake? That can be improved by a re-written opening scene. I am planning on trashing most of what is said there for something stronger.

In what way, stronger? Well, as EC pointed up, the journey of Eliot Ness, from young hotshot to troubled husband and cop is very clear, whereas Bernard’s journey from schlep to player is not. That needs to be obvious in that first scene.

There is a great deal of cutting necessary in the verbatim text, especially the political rhetoric. I have already cut a great deal there. And I can cut so much more. And I am looking forward to it.

The history, especailly the theater history went over big. I have played with the historical record a little to tell a good story, and I need to do this more.

Certain turns of phrase made me happy. LK loved the line, “You can’t eat gold medals” (Jesse Owens actually said that.) AH was made aware of Cleveland as a former major player, and she said it made her feel proud. KM said it told a great story about what it means to be an American. BM said it shows not much in America has changed since then.

There is so much more I could share, and I will. DM promised me a list of places where people explain too much. I am looking forward to that. It is all part of an extremely helpful process. I love not being alone.
Posted by pengo at 11:34 PM