What Happened (a play without the baby) 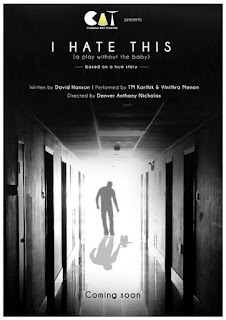 A couple weeks ago, I polled my friends on Facebook for an alternate title for my mondrama, I Hate This (a play without the baby). All of the responses I received were thoughtful and generous, poetic and appropriate. Really, every single one of them.

Titles suggestions included:
And, of course, Fuck You, Gerber. 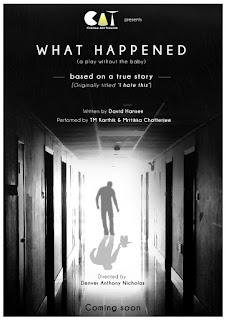 There is a company in Chennai, India who have made plans to produce my play once the theaters re-open. And they very politely and sincerely requested they promote the production with a different title.

My thinking was, and is, the title is the warning. But then, surely it has prevented any from attending. Hate is a very strong word, it is a word I choose not to use in daily life, if I can help it. I do not hate.

But we said, time and again, I hate this. We both did. Again and again. “I hate this”. I say it only once during the play, in passing, You might even miss it.

And it was this expression, a statement of feeling, that blankets the entire year chronicled in the script. And that is what I was seeking, another, less fraught expression, from the play, which best describes what this play is. Not something poetic. Not thoughtful, not soft nor sweet, not even descriptive of the situation. Not about me, not about her, not about him.

The first thing I said when I heard the news, the very first thing, was a question. “What happened?”

And this play is an urgent document of what happened. Not a question, a fact.

So, for now, we will call this play What Happened.
Posted by pengo at 12:00 AM

Email ThisBlogThis!Share to TwitterShare to FacebookShare to Pinterest
Labels: Chennai Art Theatre, I Hate This (play), What Happened (play)