Finally took in our latest offering at the Hanna, the jukebox musical Million Dollar Quartet. Word has been strong, audiences are loving this, I have had the chance to meet and talk with several theatergoers who may not be familiar with the work of Great Lakes Theater but have seen and followed this show from Broadway to the tour to independently produced productions like this one, and their praise for these particular artists is high.

Personally, I was excited to bring my mother-in-law to see the show. She lives in Athens, and the time has never been right to get her to a show there, but I definitely did not want her to miss this one. She is a great fan of live music, rhythm and blues, and the works of Cash, Perkins, Presley, and Lewis. The whole family came and it was a great evening in downtown Cleveland.

Everyone had their favorites, I think my wife was particularly taken with Sky Seals’ soulful performance as Johnny Cash, and the girl had a lot to say about fiery Gabe Aronson as Jerry Lee Lewis, and the production is definitely constructed so that it is that man’s show to steal. The boy, the bass player, was very impressed by Eric Scott Anthony as Brother Jay. We asked if it was because he rode the bass on his back near the end, but no, he was the way he rode the thing across the floor playing slap bass, that he knew had a high level of difficulty.

The term “jukebox musical” used to be pejorative, used dismissively by critics to describe shows made of unoriginal tunes, strung together to create an artificial narrative. But these shows are so prevalent the term itself is no longer a put-down. Yes, these are previously written songs, but if the book is strong enough and carries you through and the artists are to-notch, what you get is an evening where everyone gets a live, powerful rendition of songs they already know and love. The audience last night was quite enthusiastic, indeed.

Growing up in suburban Bay Village, I was raised to believe rock and roll started in the sixties, with the Beatles and the Rolling Stones. We didn’t listen to R&B or rockabilly, I was only marginally aware of Elvis (who passed, as a punchline, when I was nine) and entirely unfamiliar with any of the black progenitors of rock and roll.

It wasn’t until hooking up with the woman I would later marry and getting to know her family and what they listened to that I started to know, understand, and deeply love the music which inspired the British Invasion acts. Most significantly was when we took a road trip to Memphis, visiting Graceland and Sun Studio. 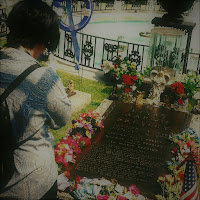 Did Graceland. I was amazed. Much more enjoyable than I ever imagined. It’s small -- homey, surprisingly un-opulent. It had been described to me as being tacky, but I would call that classist.

What my wife thought she saw was a man from dirt-poor roots who did not try to become someone else, struggling to be normal.

The much-maligned Jungle Room is great! The decor is fanciful, but also kind of sexy. Loved the wall fountain. It’s funny, by that I mean it has a sense of humor.

Everything is modest. A kidney-shaped swimming pool a small one. An ordinary-sized kitchen. Nothing grand. Normal-sized rec room. It was touching. Charming. Some fun, swinging, 60s, 70s era living.

We didn’t go overboard on souvenirs; postcards, a few books, a CD of gospel songs. I am starting to “get” Elvis.

Noticed Colonel Tom Parker was mentioned exactly once the whole time we were there. 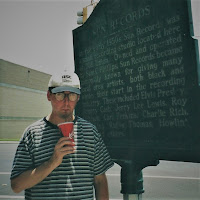 And what’s the tour? The front office, the studio itself, that’s it. Mick described the scene, and played a selection of sound clips from recordings and outtakes created right in that very room. It was more than worth the admission.

Our guide was just so great. The tour group was small, and he engaged each of us. Mick was sincere, he loves this music, tapping his foot. He had this wry smile all the time. I wish we had asked him about himself.

Hard to put my finger on, but that is now my favorite rock and roll museum.

Great Lakes Theater presents Million Dollar Quartet at the Hanna Theatre through May 26, 2019
Posted by pengo at 8:39 AM