For the third year, Cleveland Public Theatre has produced Entry Point, a kind of weekend fringe festival where you can experience anywhere from one full length to maybe five, fifteen minutes vignettes in the course of a single evening.

These are all new works, or work in development, staged simply but professionally, and an important part of each of the three nights (Thursday through Saturday) are the tightly curated and brief post-performances feedback sessions.

Two years ago I was an actor at Entry Point, in someone else’s piece. Last year I wrote a piece with Chennelle. This year I was invited to facilitate a couple evenings of post-show discussion.

The post-show talkback, for better or worse, has become a modern theatre event, or perhaps I should say add-on, or thing. The pre-show discussion (usually more like a lecture than a chat) is a staple at companies like Cleveland Play House, Great Lakes Theater and Dobama, providing context and knowledge for the show. These are quite popular even though they can turn a three-hour evening into a four-hour one.

The post-show talkback is for the die-hard theatergoer (one who would could to sit some more rather than immediately grab a drink, which is what I usually need to do) to discuss the issues raised in the production, or in the case of a new work, to provide a response which the creator may find useful. 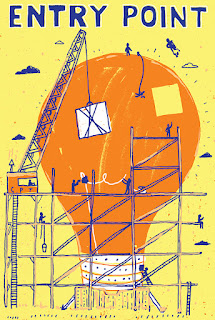 The post-performance discussions I managed on Thursday and Friday evenings were very different experiences. There were fewer folks in general on Thursday night, and the moment I stepped out to begin at least half of the audience got up to dash onto the next thing, which is fine, you can do that, but I was left reaching for a response from a small number of people.

I’m okay with silence. My job is teaching actors how to lead discussions with reluctant or disinterested children. But I was taken aback by the large number of those who did not even choose to remain.

(Full disclosure: I, too, will dash from post-show discussions, especially when the audience is mostly white; confirmation bias is a thing and I don’t need to sit among a bunch of middle-aged Caucasians affirming their own personal goodness. But, I digress.)

Because this is a creative process, and a creative evening, which Raymond, the artistic director, makes very clear at the beginning of the evening with an opening speech in the lounge which has become a delightful tradition. The audience is here to bear witness. It’s why you drove in this weather to get here.

Friday was much different, with full houses, and even at those performances at the end of the evening that had fewer attendants (folks were ready to get that drink on) they stayed and responded with enthusiasm and spirit. There’s a part where the facilitator is to write down words that the piece inspires (see photo, above) and I could barely keep up, they just kept coming at me. The playwrights must have been delighted.

The biggest challenge for me was the taking in of commentary without offering my own viewpoint. In the residency program we engaged the comment, and then play devil's advocate, pressing for alternate viewpoints of challenging assumptions. The job here was to encourage thought, field response, and move on. I deeply hope these post-performance events were helpful to these artists.

Yesterday afternoon Cleveland Public, in association with Howlround and the Dramatists Guild presented a brace of panel discussion in the James Levin Theatre, and it was exciting to see how full the audience was, especially with the impending storm.