Footloose (1984) was the original makeover show for men.

Through the travails of Ren MacCormack, boys all over America learned the importance of grooming, fashion, attitude and most of all, dancing. Kevin Bacon gave the straight guy permission to dance.

The first incarnation of the reality-show Queer Eye for the Straight Guy premiered on Bravo in July 2003. My daughter was not yet six months old, I was turning thirty-five, and precisely the right age dynamic for this new makeover show for men.

I was a big fan of that first season. I found it mildly subversive, though even at the time I, like a lot of people, thought it played into some unhappy stereotypes about gay men (and female queer eyes need not apply.)

But as a maturing Gen Xer I had fallen into a lot of comfortable habits and this was a playful guide to gentle self-improvement. I watched the show, I bought the album, I got the book for Christmas.

Even today, there are tips each of the original “Fab Five” had given me which I still employ.
Okay, the “culture” guy has always been a problem. Four dudes guide us through an adventure of self-discovery, and Jai is there with tickets for a play.

By the second season I started to lose interest, and the main culprit was branding. This show has been scorned -- then and now -- for the suggestion that if a guy buys enough things, he’ll be happy. And that is a legitimate reason for criticism. But what about me? The show did not make me go out and purchase a load of skin care products, I learned how to properly use the products that are already in my house!

But the show had become popular enough that more time was spent showing off logos than providing helpful advice. It truly did become a show that was all about buying stuff.

When Netflix announced a reboot I was skeptical. Fifteen years ago, it felt cheeky. Yes, the idea that gay men are neat and clean and stylish and bitchy are long-held stereotypes -- but 2003 was also the year before Ohio voters decided to approve an amendment banning “gay marriage.” The pros of seeing these men making life better for heterosexual men outweighed the cons of reinforcing relatively innocuous impressions of the homosexual lifestyle.

But this 2018. In the intervening time, so many more of our friends and family have come out to us, and have shown themselves to be just like us, or us like them, or really, are there us and them anymore? Most of the gay men I know are like me; middle-aged, unshaven, soft around the middle, average taste in music, with an unfortunate tendency to make stupid jokes. 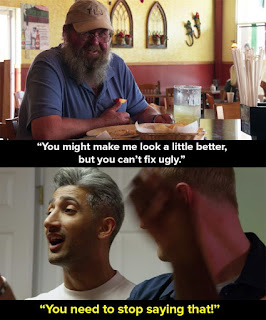 For this Millennial version of Queer Eye they dropped the “Straight Guy” from the title, because one of the eight episodes is actually about cleaning up a gay man and encouraging him to come out to his step-mom.

However this is still a show all about guys. Frankly, I am surprised they did not include any women on the team. Surely, if we are playing with gender stereotypes they could have at least included a lesbian as the designer or something, right? They did, thankfully, tilt the percentage of people of color. How is it that there were no African-American men in the original Fab Five?

Karamo makes up for Jai’s meager contributions to the previous series by not only providing theater tickets (he actually does this is in one episode) and how to walk tall and look a person in the eye, yadda yadda, but also curating one’s professional online persona, how to fund-raise, and even opening a dialogue on race with the police.

Much has already been said about the unfair distribution of labor on the program with Bobby (design) re-imagining people’s entire houses while Antoni (food & drink) teaches you how to pit an avocado.

I was concerned Jonathan (grooming) was trying too hard to be the Carson of the group, with an over-the-top sassiness which felt a bit put on. The difference is Carson Kressley is a cutting quip-machine where Jonathan mostly says, “Yaas, queen.” He says it a lot. I think I was also prejudiced against his man-bun. However, by the end of the second episode I had accepted that he is adorable, that this is really him, and isn’t acceptance what they tell us right off the bat is what this show is all about?

In fact, it’s Jonathan’s grooming aesthetic that won me over. Whereas Kyan had a one-size-fits all approach to men’s hair -- clean shaven, no beard, no way -- Jonathan knows it’s the 21st century. Guys have beards. Your beard can be better, though. And though product is still the thing, he describes what it is, what it’s for, how to use it, and I didn’t see a single brand name. Because this is Netflix, I hope it stays that way.

Finally, the walkaway star of the program is Tan (style) not only because of his early 80s pop star British accent and his supernaturally styled salt-and-pepper hair. He’s the most self-confident of the team, he owns himself and every room he steps into, and the recommendations he makes for his charges are always spot-on and impeccable.

The questions linger; does this program continue to perpetuate the stereotype that gay men have superficial interests, that it’s all about being neat and clean and coiffed and organized and also catty? 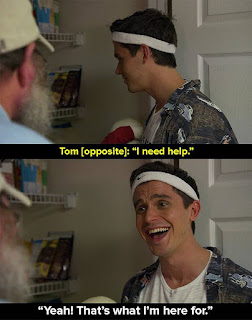 The proof may be in that last, as this version has far-less mockery that its predecessor. Yes, there is still that part of the show where the guys invade their subject’s home, comment on its state and try on all his clothes. But they used to be downright mean, even making cruel asides to the camera. The cruelty is gone and with it comes this desire to form a connection.

I don’t remember learning anything at all about the original team’s personal lives. Off the top of my head I can think of Bobby’s religious upbringing, that Tan is married, and that Antoni has a thing about smelling everybody's stuff. I was impressed by the original Fab Five. But I like these guys more.

Most of all, in an era of divisiveness, to watch a so-called "reality" show where the goal is to bring people together and to love each other is a breath of fresh air. And when things seem entirely out of control, where do you start to reassert control but with yourself?
Posted by pengo at 4:52 PM