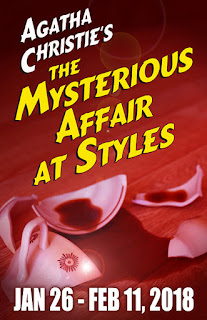 Boxing Day, a day to assess, to look, forward, to make plans, to try and figure out where it’s all going.

I need to return to the regular habit of writing by hand every morning for thirty minutes. I used to think I need to create blocks of time -- hours, say, on a Saturday, to accomplish the writing. This is not practical, however, and was only rarely successful.

When I began writing longhand a little bit, every single day, the work mounted up. It was a highly productive time. But it takes discipline, and sleep, and each have been lacking the past two calendar years.

I have always written but since I began writing in earnest -- ten years ago -- the productions have begun, the publications followed, and the opportunity to engage and collaborate with numerous companies in town.

In the past year I had my third publication (The Secret Adversary at YouthPLAYS) revamped by website (Thank you, Dreamhost Remixer) and created work presented at the Maltz Museum of Jewish Heritage and Talespinner Children’s Theatre.

There are only a few things in the coming year that I am able to report, though I am in negotiation to revive previously produced works, and have made a few proposals for the coming season.

Chennelle Bryant-Harris and I are co-writing a new play, The Lost Diary, inspired by a notorious piece of white supremacist fiction. A fragment of this new work will be workshopped as part of Entry Point at Cleveland Public Theatre, January 18 - 20.

Also, this coming month, the Chattanooga Theatre Centre will present a three-week run of my adaptation of The Mysterious Affair at Styles, January 26 - February 11.

In addition to new writing (and there exists new writing) one thing I have wanted to do is return to old writing. It is not necessary, of course, to bring every old idea to some kind of fruition, you could go mad doing that.

But there are certain pieces which went through considerable revision and even successful workshops which were abandoned for other projects. These Are The Times was one of these, and I was very happy to return to that this past summer. There are one or two of those abandoned piece to which I would like to return.

Best wishes to you in all your endeavors in the coming year.
Posted by pengo at 2:36 PM